Sikh Daggers in American Schools is Much More than a Religious Issue! 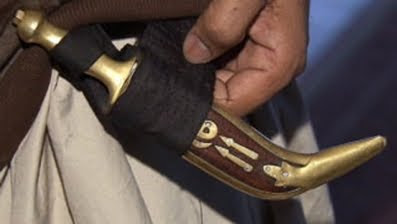 Canton Township, MI—Let me begin by saying that Sikhs are primarily from India and are not Muslims. Sikhs have been victimized and murdered by Muslims throughout their six-century history.

The Sikh religion is very much like Christianity but without Christ. That is the Golden Rule that Christians observe is paramount to the Sikh faith. The Sikhs are not complicated or violent. They avoid drugs, alcohol and tabbaco.

For a Sikh, the carrying of the kirpan (Sikh dagger) represents a commitment to fight evil. The Sikhs believe in the duty to defend themselves, families and community. Yes, you may count on for the help and protection of total strangers by Sikhs. Sikhs have served honorably and with distinction in all militaries of the free world.

All male Sikhs are required to wear the proper turban and carry the kirpan. Unfortunately laws against weapons that violate the Second Amendment also violate the right of the Sikh-American’s First Amendment.

Knives in school were a vastly over-stated problem in American schools. It was not real violence but because of the famous play and later movie, West Side Story that politicians all across America saw with the fictional Jets and Sharks dancing across the stage with switchblade knives. That dramatic sight sent lawmakers into a panic at legislatures and city councils all over. They outlawed these knives virtually overnight.

The hysteria got worse, instead of better as school children were disciplined over toys and even pictures of knives. Violence in schools is not controlled by prohibitions of Boy Scout knives but by the presence of real cops or armed security. The unarmed security people and metal detectors used by school districts across our nation are a total waste of money.

At least in the Plymouth-Canton School District in Detroit they have regained some sense. They have decided to allow Sikh students the right to carry their daggers.

This is a good first start. It’s time to let any child carry things like Boy Scout knives. Kids were trusted with such items until the loony Liberals got absolute power in our schools decades ago.

Carried a knife to school all the time. Dad gave me a pocket knife for my birthday when I was a young lad. It was a tool and that's all it was used for.

Gave my son a pocket knife and it was almost a meltdown when he took it to school with him.

Paul, hope you're in Arizona today. Chicago area got blasted real good with snow and high winds. We'll be digging out thru this weekend. 100's of cars got stranded on Lake Shore Drive last night. Took'em till this AM to get to all of them.