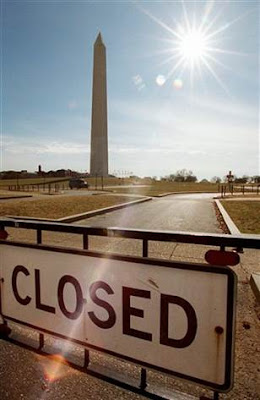 Washington, DC—The Socialists in our Congress forgot the will of the American people was to stop the bankrupting of America. Rather than cooperate they want to let the government shut down. That of course would interrupt the entitlement programs. In turn civil unrest by the Welfare Zombies is a real possibility.

Shutting down the TSA is also a welcome possibility as long as the airlines continue to fly without those un-American parasites. Flying could be fun for a change. The TSA is nothing but tyranny against Americans anyway. Despite wasting billions they’ve never stopped a single incident of terrorism, ever.

Frankly I look forward to the shutdown it should stop the hemorrhage of our tax dollars during that period. Perhaps we will see that there are so many agencies we don’t need like the alphabet police and so many agencies created in the last four decades. What wouuld we ever do without an FCC or the FTC?

The shutdown of the US government is inevitable. The shutdown I see coming will not be temporary. It is mathematically impossible to continue. Wisconsin is only the beginning. The Feds have only 2 choices, hyper-inflate or default. People are going learn the real problem with multi-culturism real soon. If you live within Chicago city limits, good luck!

If you live within Chicago city limits, good luck!

I make my own luck.

Inner city ghetto TNB tenderloins again honey? I think this one had been eating alot of KFC, just look at that liver.

Read up on how to prepare, rat, dog, cat, pigeon and of course humans. 12 yr old females are supposedly good eatin.