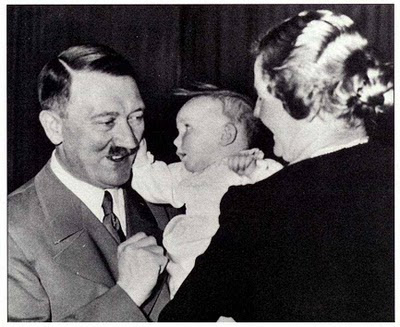 Berlin, Germany—Timing is everything and for one budding world leader he made all the right moves.

Let me say that National Socialism and Adolph Hitler left a nasty scar on this earth that will remain forever. Hitler should forever be remembered as one really evil politician. If we must thank Hitler it will be for the many thousands of miles of film, photographs and documents the NAZI’s left behind that documents their horror.

Hitler was a student of Karl Marx and Friedrich Engels. Hitler was and is a product of the Radical Left wing as was Josef Stalin. Hitler had his own spin on Socialism. The radical Left wing has made a nearly seven decade deceptive campaign to somehow assign Hitler to the Far Right. I guess they don’t want to accept Hitler as one of their own.

Hitler redistributed wealth in grand style and fed the starving people of Germany. He was considered a rising Socialist star as he was selected for Time Magazine's Man of The Year.

Hitler came from the middle class. He studied art, architecture and politics. Hitler served Germany in World War One and earned the Iron Cross for bravery. Hitler was also injured in a mustard gas attack that put him in a Munich Hospital.

Hitler created his own image as a popular public speaker and man of new political ideas. This gifted public speaker could attract a crowd and keep them spellbound. Soon Hitler was making a good living by charging people admission to hear him speak.

Hitler quickly felt the ability to challenge the post World War One German government with an attempted coup d'état. This effort was the failed Beer Hall Putsch of 1923 waged against the Weimar Republic by some 3,000 NAZI’s.

When the dust settled fifteen NAZI’s and four German cops lay dead. Hitler and some of his cronies were arrested for Treason, tried and convicted. Hitler managed to turn his trial into a spotlight political venue where he characterized his acts as done for the good of the German people. Hitler’s trial became his moment in the sun. Hitler only served about eight months behind bars for his crimes using that time to write Mein Kamph (My Struggle).

Hitler emerged from prison more popular than ever. The NAZI movement was still a minority trying to break out into the political mainstream. Hitler began a wildly successful political campaign using political promises instead of force to gain absolute power. Like all politicians, Hitler promised something for everyone.

One only has to see the numerous historical films of huge adoring crowds that followed Hitler wherever he went. Countless women and girls shed tears of joy just for an opportunity to be momentarily close to the rising rock star of National Socialism.

Had it not been for his ill-advised attack on the Soviet Union Hitler may have survived to be considered the greatest political leader of all times.

As for anti-Semitism and the deportation along with the enslavement of Jews was popular at the time. The elite Jewish financial leaders were blamed for all that ailed Germany. When it came to the Jewish question the secret plan of total liquidation only became problematic when exposed by the Allies at the fall of Germany. I don’t think even the world’s staunchest Jew haters could stomach the idea of the Holocaust. Murdering women and children has no place in any civilization.

Adolph Hitler was genuinely loved by the people of Germany. When government becomes so powerful and all-important to people this is the result each and every time throughout history. Government can never be allowed to grow like the Socialists demand, or people will always suffer. In the end 50,000 million people perished during World War Two. That includes six-million Jews and nine million good Germans.

Political leaders are hazardous for our health and safety. Politicians should be reduced to being simple servants hired to make roads, infrastructure and maintain national defense.

Study every so-called great leader in the world and you will find a total corrupt tyrant behind their phony smiles. Trading liberty for wealth or security is always dangerous and foolhardy.
Posted by Paul Huebl Crimefile News at 2/05/2011 09:16:00 AM

An American Warns His Countrymen

Hitler did not like what Apple did to Final Cut pro according to this spoof...