Getting Up Close and Personal with Judicial Tyranny 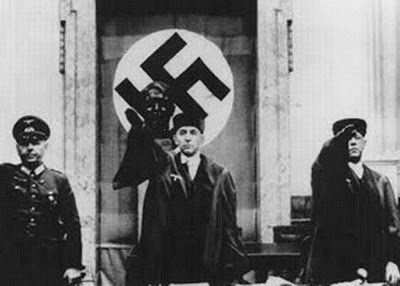 Phoenix, AZ—I’ve been inside lots of courtrooms here as I have in Chicago and Los Angeles. I’ve see judicial tyranny first hand in all of these courts. It is frightening to see this anywhere but the judges are given absolute power and power corrupts. Personal baggage accompanies every judge to the bench simply because they’re human. The question is how bad can they get?

It is our appellate safeguards that were designed to prevent judicial abuse and error. This process is somewhat problematic since the ranks of judges are filled with law schools chums, good ol’ boys and even former lovers. Judges are also linked by mutual political sponsors.

The role of judges is a simple one, to act as a buffer between citizens and the government. They are intended to be the guardians of fairness at least in theory. This has nothing really to do with Liberal or Conservative politics but simple humanity and equity. There are good judges and then there are terrible judges. Removing bad judges is incredibly difficult in most cases.

The most glaring examples of bad judges come from all sides of the political spectrum. Judges either follow the written law or they corrupt the law. There is at time incredible pressure on judges by their political sponsors to arrive at less than legal decisions. There are people that actually buy the desired outcome of cases with cold hard cash. Operations Greylord and Gambit uncovered mass judicial corruption in Chicago. Prison terms and suicides marked those sad chapters of judicial history. I've pernonally been in the courtroom of every one of those judges involved.

The fact is our judges have the power over the quality of our lives and even life itself. Any court in American can dispense tyranny rather than justice simply because the power to do so exists. People are conditioned to believe their government is fair or there would not be courts. People everywhere are incredibly naive.

I have a quote I wrote that I live by and that is, “If justice happens, it’s usually by mistake and for all the wrong reasons.” Cynical you say? No, that just the way it really is.

I’m going to Berlin Germany again in a couple of weeks and plan to take a closer look at one of the most tyrannical judges in modern history. That was the late, Dr. Roland Freisler (30 October 1893–3 February 1945). He became State Secretary of Adolf Hitler's Reich Ministry of Justice and President of the Volksgerichtshof (People's Court). This court handled political actions against Hitler's dictatorial regime by conducting a series of show trials. The defendants in Freisler’s court were not Jews but rather German citizens many of whom were denounced or implicated by their neighbors and some cases their own children.

There was genarally only one verdict and sentence in Freisler’s court, Guilty and only one sentence, death. Freisler’s trials were public and were often intended to be show trials. Freisler simply made murder by government legal in Germany.

Judge Freisler would have faced a court and probable hanging for his own crimes but for an Allied bombing raid that hit his court killing him on 3 February 1945.

Freisler was sent to be a panelist with 15 other high ranking Nazis at the Wannsee Conference 20 January 1942 where they came up with the, “Final Solution to the Jewish Question.” Freisler made that action legal too.

A great film was made about one of Freisler’s Show trials, Sophie Scholl, The Final Days. Sophie Scholl, Hans Scholl and Christoph Probst all German students in Munich who were tried on the same day by Freisler. You can get this film at Blockbuster, Amazon.com or Netflix. This film made in 1995 will haunt you for sure.

CLOTSO: Close to off topic sort of, (What a jerk)

In attempting to get hearsay statements admitted in Drew Peterson’s murder case, Will County prosecutors today found themselves arguing against the very law they helped create.

Saddled with a botched police investigation several years ago, State’s Attorney James Glasgow had pushed for a state statute that would allow hearsay statements against Peterson at trial. Dubbed Drew's Law by legal experts and legislators, he hailed the bill's passage as a way of letting Peterson's third and fourth wives speak from the grave.

Glasgow acknowledged the strange turn as he asked the Third District Appellate Court to ignore his statute in favor of the less-restrictive common law. “Ironically, I’m in a unique position here,” he told the three-member panel. “I wrote the statute.”

Yes,there needs to be a legal mechanism to hold those in the courts more accountabil.