Ask a Liberal Why He/She Voted for Obama 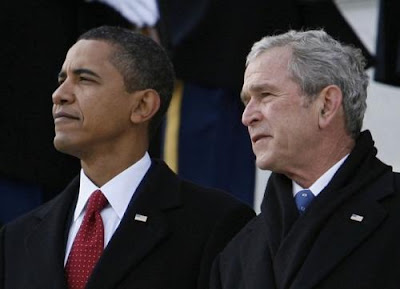 When I ask people this question the answer was always the same, "Barack Obama is a big disappointment, but George W. Bush was so much worse!”

One, not so minor problem with that answer is that Bush was not running for President! The Republican ticket was led by that Liberal pretend Republican, John McCain. They could have voted for the Liberal they knew instead of that Communist they did not.

Bush was never even close to a Conservative and was a really crappy president. Was Bush really a good reason to elect a Communist to lead our nation?

Obama either is a Muslim or at least has strong Muslim ties. This is evident in his behavior during the uprisings in the Muslim nations. If the Muslims cease fighting among themselves Israel would become a sad memory. It looks like this may well yet play out. We must also remember Obama was raised as a Muslim. We all know Muslims hate Jews.

Obama will be reluctant to help Israel as he keeps our military resources tied up in the very places he criticized Bush for occupying.

It’s strange to have watched Obama and his minions blame Bush for Afghanistan, Iraq and garbage like the Patriot Act. The most complained about Bush policies are more prevalent than ever under Obama!

I guess blaming one’s self for making a disastrous choice in the voting booth is more difficult when you can blame Bush instead! I think it's obvious now that it's like Bush has never left the Whitehouse but for the trillions in additional government waste.
Posted by Paul Huebl Crimefile News at 2/24/2011 10:23:00 AM

For the good of America, Obama must resign now!

I cant get anyone I know to admit to voting for Barry even though I know they did.