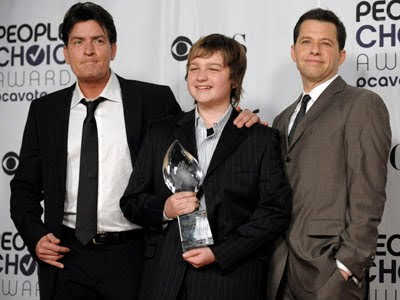 Hollywood, CA—I was not going to weigh in on this story until I began to think of the huge collateral damage caused by the abrupt cancellation of, Two and A Half Men.

Estimates of the financial loss to CBS are an astronomical, quarter-billion dollars. The show was wildly successful during a period when people everywhere have been avoiding television altogether. The show was the main choice of our airlines to entertain passengers in the sky. Yes, the show is downright funny and the players all have great chemistry.

At the heart of this mess is a talented, handsome but troubled Charlie Sheen. Exhibitionistic excessive womanizing, drug and alcohol consumption has taken center stage. That behavior seems to now be pushing Sheen out in the cold.

Sheen has been reckless not only with his own blessed career but the careers of everyone connected to the show. I don’t want to see this quality show end. The losers will include the fans

America’s Drug War is beyond an abject failure. It has destroyed many more lives than the drugs themselves if that’s possible. It has also torpedoed the basic freedom that made this once great county. Americans still believe that drugs are bad and enforcement is good. The Drug War was absolute proof that propaganda is a powerful tool.

Sheen has opened a very public war of vitriol with the show’s creator and CBS. The dispute is as ugly as anything this town has ever seen. There is no end to the disaster in sight.

Let’s talk about Sheen’s chemical dependence. There are loads of so-called experts on this subject and they all have one thing in common, failure. I say there are no experts and we must let nature take its course. The treatment programs are meaningless exercises fueled by relapse. Either Sheen will survive or he won’t and only he, not the government, CBS or anyone else can do anything about it.

One thing for sure, Sheen has gotten through eight season of his show and despite his difficulties has avoided interruption. The current stoppage is not because sheen could not perform but over the publicity generated by off-duty behavior deemed scandalous by our society’s moral code.

What must happen is that Sheen needs calm down and try to behave. I want a ceasefire and the two sides to negotiate a settlement that includes the resumption of the show with Sheen provided he shows up sane and sober with the proviso he can deliver the product he has for the last eight years.

CBS and Sheen are not so big or tough that they can’t put this mess where it belongs, behind them. Quality shows are too difficult to come by in the vast wasteland of television.

The only people that will profit from this continued public battle are the bottom-feeding lawyers that are gearing up for years of great paydays. In the meantime the rest of the cast and crew of the show have to learn how they will be making car and mortgage payments.

As for Sheen he like all of us is aging. His shelf-life in entertainment is too short to endanger his health and that of the people that count on their's and Sheen's ability for survival.

Charlie Sheen is may be very rich with money but he is impoverished in many other ways. His dad, Martin Sheen for example is one truly fine human being. The elder Sheen can only be suffering greatly right now because of this mess.

If I could I’d lock all of these players in a room together and not let anyone eat, drink or use the bathroom until they could resolve this in a way that does not hurt innocent people.

No Charlie, No show. I turely hope they can work something out so we won't have to loose such a good show.

Its the crew and other actors who are going to suffer.....CBS and Sheen don't give a crap......

Personally, I don't care if an airplane engine fell out of the sky and landed on his head. He's a pos that should be basking in the glow of prison lights.

Thanks for this post Paul. You seem to be the only sane person out there on this one.

I personally have never seen the show with Charlie Sheen, but did see Apocalypse Now with his dad under Francis Ford's direction and remember when that film was being made and that Martin Sheen suffered a heart attack.

What you said is absolutely right!


The ringtones are amusing but the rest is power struggle nonsense,

and the media's involvement - perhaps to take American minds away from the morbid news of recession & financial depression, and all the unrest overseas, and not to forget the grotesque gas prices...

Are we living as Romans do, if we are - who is next going to be sent to the lions?