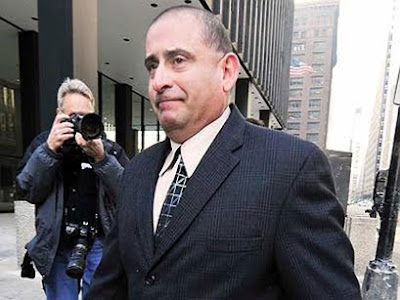 Chicago, IL—Being a cop here can bring on incredible pain and suffering. There is the avalanche of verbal and sometimes physical abuse from suspects. There’s always the constant reality of placing yourself in danger responding to radio calls.

If it’s not the low level of humanity you must deal with everyday it’s the threat and fear of swift and draconian departmental discipline that can put officers under the gun.

Cops must never show fear, or appear to be stressed out. Cops have no choice but to put up an act that masks reality. If a suspect smells a cop’s emotional blood he will walk all over him or her. If the department sees anything too emotional manifested by a cop he will be disgraced and sidelined.

I can’t help but think about Chicago policeman Bill Cozzi. He was verbally abused by Randle Miles who was very combative in a hospital emergency room. Miles was already restrained in a wheel chair but it did not prevent him from spitting on Cozzi.

Cozzi whacked Miles a few times in retaliation with a leather sap. Since Miles was not noticeably injured by Cozzi, the physical assault was what we call an insulting or provoking kind. That was caught on tape and today Cozzi is serving a 40 month federal prison term.

Was Cozzi suffering from Post Traumatic Stress Syndrome as a result of being a cop? Does anyone really care? The truth is, that mitigation factor was never weighed because Cozzi would have had to admit to a stigmatizing mental disease. It came to making a choice of being called a criminal or a nut. However you call it Post Traumatic Stress Syndrome played no minor part in this event.

Cozzi was a real candidate for duty disability as the professionals would have called his assault on Miles symptomatic of mental illness brought on by simple occupational hazards.

Cozzi at a minimum should have received punishment less than incarceration and certainly putting him on duty disability would have made more sense than prosecution and imprisonment. Cozzi should have been allowed to rest and even be returned to duty at some point.

Cozzi’s family was saddled with many tens or even hundreds of thousands in legal costs for both local and Federal prosecutions. Cozzi’s life was destroyed as a result of all the aggregate punishment and disgrace.

The media and the marxists in the government live for the day when they can nail a cop. That's why I always remind my fellow coppers to ignore the marxists that are sent out to "train" us about so called right wing extremists. The people from Homeland Security are advising the police across the country that even military vets are potential terrorists! The SPLC and Homeland Security are the ones to keep your eyes on. Watch your back. Watch each others back.

A lot of people who read about Bill don't realize he was already convicted in state court for Battery, was given 2 years probation, paid a fine, apologized in court to the victim and took a 2 year suspension, no pay, from the CPD and took anger management classes. Then Supt Cline tried to fire him but the Police board said 2 years suspension was enough.

It was only when J-fled was about to take over the news media in town decided to run the over 2 year old footage to show how "out of control" our dept was. The week before Bill was supposed to come back to the academy for retraining did j-fled call his buddies in the state dept and have him charged federally with civil rights violations. J-fled admitted this in one of his "town hall meetings" he had with POs when he started. The Feds knew about this when it happened but didn't do anything till the phone call from J-fled.

Bill knew he was screwed so he plead guilty to avoid a longer sentence. They sent him down to Louisiana instead of close to home to make it hard on him and his family.

Sorry for the long post but a lot of the facts either get ignored or glossed over when the Media in Chicago reports Bills story.

Cozzi should have been given a medal for thumping that worthless thug. Back in the 50's no one would have thought twice about this. Nowadays, everyone seems to cry when a cop tunes up a criminal. The pendulum must swing back the other way or we are truly screwed as a society.

I guess I should have rehashed the state prosecution and the two year suspension and the cheap tactics by Supt J-Fled.

The bottom line is this sould have been handled differntly outside of state and federal court.

I'm the 11:24 am poster. I did not mean you when when I said the facts have been ignored or glossed over. I may not always agree with you but you are always fair and use logic in your arguments.

Thanks for posting about Bill.

Cozzi did nothing wrong!!

Bill Cozzi and Jon Burge -- both victims of prosecutorial misconduct.

Hard to believe that Burge was convicted before Judge Lefkow. After her family members were murdered, one would think she would realize what we are up against on a daily basis!

Most people are hypocrites.

Cozzi was wrong for what he did, but sending him to prison was like hitting a fly with a sledgehammer. Good riddance Mr. Weis

Cozzi was wrong for what he did, but sending him to prison was like hitting a fly with a sledgehammer. Good riddance Mr. Weis

So how do you handle SAVAGES??With verbal judo?being a real street cop sometimes involves using force to control out of control individuals.These individuals often shed any real connection to civilized humans and sometimes need a good smack down to tame the beast.

Turn on the TV and look for old shows like "M Squad", which is about a 1950's homicide unit of the CPD (M stands for murder). They don't play games and wouldn't hesitate to smack someone who is asking for it. This usually straightens out the attitude of the bad guy. We have too many damn sissy panty waist liberals these days. That is one of the root causes of all our problems.

Bill Cozzi was the victim of prosecutorial misconduct, misinformation by a "commie" media and a new superintendent who wanted to make a name for himself. This Chicago media is out of control. They constantly paint the police as out-of-control bullies who get their kicks brutalizing black people. I think it is refreshing that we have elected a young president (FOP) who will challenge these morons.