Self-Defense during a Civil Insurrection 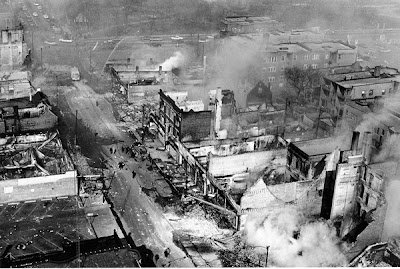 Chicago, IL—The Obama Administration’s checks are about to bounce in a big way.  The use of paper currency backed by nothing is ready to explode any day.  Income taxes are either not being paid or the taxpayers have no income to tax.
The Marxist entitlement monster can’t survive under these circumstances. Obama’s checking account is hopelessly overdrawn and soon his account will be closed.  The entitlement addicted folks will take to the streets with looting, burning and worse.
No nation has ever peacefully survived this kind of a crisis without anarchy and chaos followed by martial law and a fascist controlled future. Before it’s all over you may have to engage military forces loyal to Socialists or Communists.
Unfunded police, jails, even courts are already a reality. There will be no protection for you and your family if you are incapable to take on this vital role. If you live in or near an entitlement addicted neighborhood you better find friends or relatives that will take you in somewhere like on a farm.
I will give you a list of what arms and supplies you need for the average family.
Handguns are underpowered and have insufficient range for serious combat. You do need them for close in fighting.  Shotguns are really effective short range weapons with heavy shot or slugs. Rifles have much better range, penetration and effectiveness for shots beyond the 100 foot range.
The popular rifles and carbines including the AR-15/M-4/M-16 along with the AK-47 type rifles were good for Viet Nam jungle warfare.  These same rifles are inadequate for fighting on American soil. You’re better off with the M1 Garand or the M-14 rifles using those bigger .30 caliber cartridges that can easily penetrate automobiles and light body armor.
For every person of suitable age and discretion a semi-automatic handgun in .357 Sig or .45 ACP in a belt or shoulder holster is needed.  No less that 750 rounds of ammunition should be available for each handgun.  Those smaller pistols and revolvers including the popular 9MM are just not effective enough for serious defense.
For a single family home the following defense weapons are needed:
1.    A 12 gauge shotgun either pump or semi-automatic with no less than 200 rounds.
2.    A thirty caliber semi-automatic rifle with no less than 1,000 rounds.
Fully automatic firearms waste too much ammunition and if you have them be sure that selector switch is on semi-automatic. Of course if you have an unlimited supply of ammunition that’s a completely different story.
If you have at least the basics I have covered it’s also nice to have those underpowered jungle weapons and perhaps a good scoped deer rifle for those long shots.  You can never have too much ammunition.
Training with the weapons I’ve discussed is absolutely imperative.
You will need military style helmets but even a motorcycle crash helmet beats nothing along with some kind of body armor. First aid supplies beyond that camping kit are needed.  Get yourself an advanced field manual for Medical Corpsman.  Here is a site that has what you need.
Here is a trick for sterile bandages. Sterile dressings are very expansive.  Instead have a bunch of laundered white wash clothes and diapers.  Wet the material, wring it out and place in the microwave oven for three minutes. Let them cool and apply them with lots of pressure if there is bleeding.
If you are expecting street fighting in your area you can expect your utilities to be interrupted.  Water, electricity, natural gas along with heating and cooling may end.  You need big bottles, jars and buckets for drinking water to fill as the situation deteriorates.  You must keep a lot of non-perishable food, propane tanks and fireplace wood on your property.
First let me say always avoid firing shots from your home trying to defend it from a hostile group. Your home will soon be burned to the ground because your home is no Alamo.  Engage enemy forces from the distance.
The rules of engagement are different in an insurrection in that there are no rules.   You must shoot to kill your adversaries before they have a chance to kill you.  Firing warning shots is a stupid a move as you could ever make.
If and when order is restored don’t share your war stories with authorities.  Don’t try and report anything at all and don’t answer questions, ever.  Be prepared to hide your weapons once order is restored.  Depending on just who has forced order, you may have to make war on them too.
Posted by Paul Huebl Crimefile News at 8/14/2010 09:46:00 AM

Always a good idea to set up a couple sand bag bunkers on your lot. Notice how gangs operate. They have their look outs on the corners, whistle appropriately and decide when to shoot anyone that doesn't belong. You and your neighbors can do likewise to defend your block.

Paul is not being realistic in saying to never shoot from your home. Where are we supposed to engage the enemy? Just the act of getting to gang turf without being picked off by government badges or by some Bubba is slim to none. Firing from a position on your property or within sight of such will be mandatory. Key will be to pick off marauders at distance, if possible.

Should be easy to picture- You're sitting in your backyard grilling a steak when the ground starts to rumble...hundreds are running down your street entering homes and then setting all ablaze...what to do?

Indeed... selecting a good vantage point (behind sand bags) will make the difference between success and death as you open up with your M1A.

There is no such thing as too much ammo!!!

I know alot of folks that have nice gun collections(they are not collector types)that have little ammunition available if TEOTWAWKI happens.

Having a box of 50 rounds for your duty pistol wont cut it.

If using a weapon that takes a detachable box magazine,you need a minimum of 10 mags(more is better).

Shotgun,its slugs or 00 time.While many have stopped an intruder with bird shot at home defense ranges( a 1 1/8 ounce trap load WILL kill you dead at close range) the scatter gun needs larger projos for urban combat.

Stock plenty of bottled water and easy to prepare food items that do not spoil easily.

Make sure that you stock medications if war clouds are on the horizon.

If members of your family are not really good with a gun,make them a "bullet bitch" to load mags and run ammo to your fighting positions.

Good luck to all!!

Light armor is not, soft body armor. Light armor is used on vehicles and shields. The .223 is fine for a jungle environment but inadequate for urban warfare as they found out in Iraq. Certainly even a .22 rabbit rifle beats nothing at all. But bigger is always better. More juice please. Medicine stock piling is a good idea too.

Instead of just washed rags for bandages (good idea though), carry a few packages of tampons with wings.
Very good for heavy bleeding.