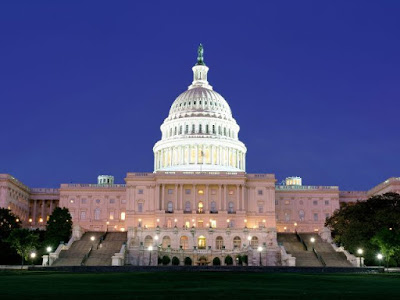 Washington, DC—In 1994 there was a political massacre of Democrats that voted for that hated and now expired Assault Weapons Ban. Heads rolled as Republicans took control. 16 years later that triumph became a distant memory.

Pretend Republicans along with confused Blue Dog Democrats will join many hard corps Barack Obama's supporters without seats when the election music stops. It will be like the quiet after a nasty storm

Two heads of the three headed snake will be gone as Nancy Pelosi and Harry Reid are retired from public eye. Plans are already being made for selecting new committee chairman and the directions of lots of needed investigations.

Obama’s agenda will be as dead as Dillinger as he sits out whatever time he has before his removal from office. Yes he will be removed, one way or another.

From Andrew Lloyd Webber’s Evita, Juan Peron tells Ava, “Dice are rolling, the knives are out, would be presidents are all around. I don’t say they mean harm but they’d each give an arm to see us six feet underground.” I’m sure Barack has said something similar to Michelle by now.

As for pretend Republicans McCain and a few others will remain but many will be retired. Let’s hope the Republican party, purges the pretenders for good.

The bad news is as long as he occupies the Whitehouse Obama can be counted upon to veto any rollback of his Socialist agenda.

Will the Obama Bolsheviks mobilize and wage war in the streets as the various big cities fail from overspending, corruption and mismanagement? You can count on entitlements to be squeezed in a big way.

We can only hope that we can last without a Civil War until the new Congress is sworn in January of 2011. If a divided America goes to war there will be some serious population control among the ranks of the entitlement addicted that refuse to remove their hands from taxpayer’s pockets.

Historically Democrats have never been so vulnerable since polling began many decades ago.

I don’t care what anyone’s prediction may be, there will be some very extraordinary events happening over the next five or six months.
Posted by Paul Huebl Crimefile News at 8/30/2010 02:15:00 PM

It appears that Harry Reid is history come the next election, but I haven't heard anything about how Nancy Pelosi is doing with her constituents. Remember she is from the San Francisco area where most people seem to be batshit crazy lefties. Any scoop from the left coast on her popularity out there?