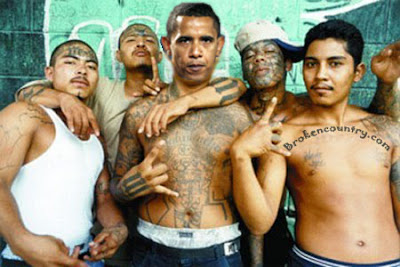 East Texas—As the Socialists and Communists in our government obstruct enforcement of federal immigration laws the export of Crime, drugs, ignorance and poverty continues unchecked.  Obstructing justice used to be a serious crime. The Socialists and Communists I refer to also include politicians that wear the Republican Party label like George W. Bush and John McCain.
Americans are facing dangerous criminals everywhere and with the economy destroyed by bailouts and the non-stop printing of currency it can only get much worse.
Americans better be well trained and armed because soon they will have to fight for their very lives. The period of anarchy will be followed by frightened voters who will grant absolute power to the government. What’s next is our worst nightmare as the Communists in our government unleash criminals like the two creeps in the attached video to control Americans.
There is a simple and very nefarious reason traitors in our government want these thugs here.
Americans at some point will stop paying taxes either because they refuse or their earnings will stop cold.  Either way the government monster we’ve allowed to develop will begin to purge, and plunder the formerly productive Americans and their property or die. They will do this to maintain absolute power.
A dire forecast you say? You’re absolutely right but it’s based on redundant historical examples. In fact I can’t find an example anywhere, where a nation resolved such a mess in a peaceful way.
Watch these to struggling and peaceable immigrants deal with a policeman on a routine traffic stop.
For my copper pals, you’re going to find numerous tactical errors by the Texas highway policeman who nearly lost his life. Please always follow your training because I hate copper funerals or writing stories about them.
BLUtube is powered by PoliceOne.com
<