The Official Crimefile Review of TAKERS 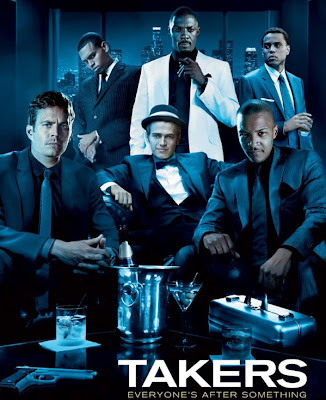 Los Angeles, CA—I have a policy to avoid writing reviews for films I don’t like. I have complained that good films are hard to find these days. There is a lot of crap out there. I feel the need here to warn my readers to avoid this bomb.

Takers will take 107 minutes of your life you will never get back. This Sony Pictures release has a racially diverse group of stylish but overdressed thugs pulling grand stick-ups. This is a film for troubled 13 year-olds that seems to be written by their peers.

Realism was tossed out the window in favor of senseless violence. Violence is in our world and it belongs in films but this was an assembled mess. The director, John Luessenhop has the actors handling their weapons with gross unfamiliarity.

There was a grand foot chase of epic proportions beyond the ability of even the greatest athletes. That unrealistic chase gave me Post Traumatic Stress Syndrome systems and whiplash.

They have a group of armored car guards that willingly sacrifice their lives by taking on the much greater force of thugs that are armed with select fire M-4 carbines and shotguns. No American armored car company would want their guards taking bullets for the cash they carry.

As for the actors, their performances were very decent in the various scenes. Matt Dillon and the rest of the young male cast wasted their talents and time on this terrible script. The photography was good, the stunts looked painful and the thugs were costumed right out of GQ Magazine.

I wrote this review so you don’t waste your hard earned cash on this garbage. Perhaps you should take in some local community theater and skip the movies until the major talent agencies figure out how to make films again. Yes folks, it’s the talent agencies that dictate what films will be made, not the studios.

Now, Paul, I am little suprised that you did not predict that the movie would stink. One look at the poster is all I need to see.