Beck Rally Is Just The Tip of a Big Iceberg 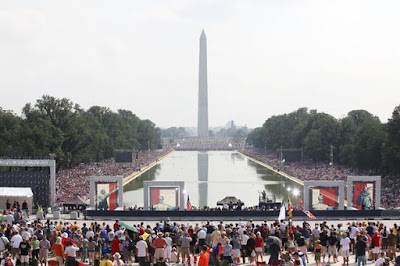 Washington, DC—Fox News commentator Glen Beck took the Capital by storm yesterday as hundreds of thousands betrayed Americans swarmed the mall. They were there to defend our Constitution and way of life.

This may be the last time Conservatives send an impressive and peaceful message to those Communists in our Whitehouse and Congress. The traitors have turned their backs on Americans and our Constitution as they have prosecuted a war against the American dream.

Barack Obama can be counted on to not acknowledge his opposition. Obama will simply push on with his arrogant Communist revolution instead of trying to find some middle ground that might unite America. That indeed, is going to be a very dangerous path to travel.

The November elections are shaping up to be a vigorous and overdue purge of corrupt, progressive, and Leftist politicians that wear the labels of both major political parties.

The new Congress can be expected to begin numerous investigations of the Obama Administration. Issues like Obama’s birth controversy will never evade the Congressional subpoenas. Either there will be a real American birth certificate produced or Obama’s reign will end.

There are plenty of other questions that will finally get answers like the reasons Obama and his wife lost their licenses to practice law in Illinois. After that, Obama’s corrupt financial shenanigans with various convicted Chicago political pirates will be fair game.

I see no way for the Obama Administration to survive to the competition of its first term.

There is a down side of this and that is Obama’s supporters here and within enemy nations can be expected to make war on America. We are in for a very rough ride.
Posted by Paul Huebl Crimefile News at 8/29/2010 07:40:00 AM

I look forward to the Falland fall.