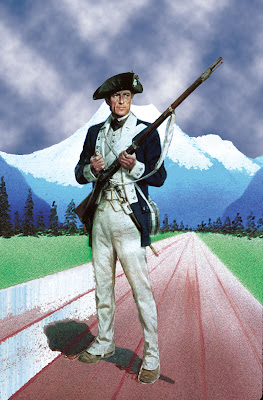 Washington, DC—When politicians place an anti-American agenda before the Constitution it sometimes takes decades for the Supreme Court to right those wrongs. We saw that in the case of unconstitutional gun bans in Chicago and Washington, DC.

Our founding fathers recognized that ballots and the Supreme Court may fail to stop forces seeking to overthrow our Constitution. They gave us the full responsibility along with the means to use force and violence to protect our way of life. They recognized that the threat to freedom could come from the inside as easily as from foreign forces.

Our own Communist and Socialist politicians have cavalierly and consistently violated the Thirteenth Amendment that outlawed slavery with their slim majority. Socialism cannot function without slavery.

It takes a lot more than a simple majority to change the Constitution these traitors have sworn to protect and defend. These Socialist thugs have no right to simply vote the Constitution away like they’ve been doing.

Our Constitution and form of government has been under a hostile attack by deceitful, millionaire politicians that deserve nothing less than hanging for their treason. It is the absolute responsibility of every loyal Americans to use the vehicle of the Second Amendment to purge the despots from our government before they complete their Socialist revolution.

If we let them complete their plans, as always a Socialist holocaust will begin as they assume absolute power. We have little choice but to use all means to remove the traitors in order to survive.

Sadly the time for loyal and brave Americans to act is long overdue. The un-American actions of the Obama Administration have greatly exceeded anything King George did that caused the colonists to take up arms for freedom. When it comes to our Constitution we can either defend it or lose it.

The Obama Administration and their Socialist supporters in Congress have ignored the majority as they have ignored and ridiculed millions of Americans that have peacefully demonstrated on the side of freedom.

Thankfully most of our military and police will never side with those seeking to destroy or Constitution. It’s very unlikely they will obey commands to open fire on or detain Americans defending America.

There is nothing wrong with and everything right about removing all Socialist revolutionaries from our government and soil. They need to be called to book, dragged through the streets, tried, convicted and be hanged for treason. Americans Have the Absolute Duty to Use Force and Violence to Protect Our Constitution.  That is the only American Way.   Freedom is never free.

I totally agree! We must defend and protect America! And, if this Ground Zero mosque goes up it is our right to defend America from our enemies, both inside and outside the U.S., since our government has refused to fulfill its obligation to citizens. As much as I would rather there be a peaceful solution, if violence is called for, then we must accept the challenge and obligation to defend America.