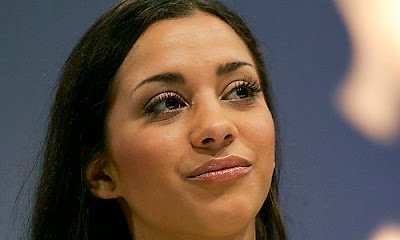 Darmstadt, Germany—She’s hot and sexy as she makes all the right moves with her successful pop band, No Angels. She is Nadja Benaissa who has confessed to authorities her unprotected sex, that has infected one man with AIDS and exposed several others.
With this shocking international publicity, we may soon learn how many other men have been running to doctors to learn their fate.
AIDS virus stories have all but vanished from news headlines as expensive drug treatments have prolonged lives.  The disease is still very deadly and those infected are dangerous to others.
Benaissa became aware of her HIV positive diagnosis in 1999 and apparently chose to turn herself into a deadly weapon.  This genuine femne-fatal was truly an angel of death that had been victimizing men for at least a decade.
Benaissa is now on trial for causing grievous bodily harm in one instance and attempted grievous bodily harm on four additional counts.  Benaissa may receive a ten year prison term.
Various sympathetic AIDS activist groups have complained that Benaissa has somehow been treated unfairly by authorities.
Benaissa has expressed regret and repentance to a writer for Der Stern magazine but to those this Black Widow knowingly infected her remorse must ring hollow.
Posted by Paul Huebl Crimefile News at 8/16/2010 06:51:00 AM

The "f" word is the root of the problem.

I find it difficult to believe that any person suffering an HIV infection would condone this women’s conduct if she knowingly infected her sex partners. Advanced treatments have extended life for persons suffering this illness but their quality of life is greatly diminished. It is noteworthy to mention that those she infected probably consented to engaging in unprotected sex with her without any knowledge of her medical history. We live in dangerous times and the one person with the greatest responsibility to protect your health is yourself. Her victims are responsible for their own fate in this regard, it isn’t like the illness and how it is transmitted is unknown to the general public. If you engage in risky unprotected sex with a stranger you are throwing the dice and gambling with your life.

However, I do not intend to argue an excuse for her criminal behavior, if she is guilty she should be punished appropriately and a sentence of ten years may well be for the term of her natural life.

How could someone be so evil! She is mad at men because a man gave it to her. When you out there in this society having unprotected sex,this is what can happen. This have been talked about for years and people still play russian rullet with their lives.Listen Up! MEN and WOMEN,everything that look good isn't always good! Save your lives,put on a RAINCOAT! This woman need psychological help,she doesn't need prison time,there is a problem with this woman,no one in their right mind would do such an EVIL thing unless something is wrong with her. Can you imagine being told you have AIDS? I would believe that would be a mind blowing thing,she need to be locked up in a mental institution,where she can get some HELP!