What’s Ahead For Barack Obama 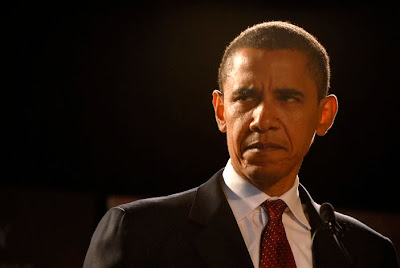 Martha’s Vineyard, MA—As Chairman Barack Obama hides from the press on vacation his young Presidency is melting. His ratings are in a free fall as the failing economy and hyperinflation is on the way.

The anger of Americans is swelling by the day after Obama has relentlessly seized control of banks, private businesses and is publicly conspiring for the hostile takeover of the medical and insurance industries.

Free enterprise has been destroyed since competition with the government is nearly impossible. Slavery is here and has been imposed on Americans not yet born by our dedicated Marxist leader.

It is unlikely that Obama can continue without a Constitutional crisis as Americans begin to find more than just words to vent their rage.

Every effort is being made to silence those who loathe the trashing of our form of government and way of life. Hopefully there are enough Americans that will defend and protect the Constitution of The United States and overcome these Bolsheviks and their pernicious plans.

Members of local, state and federal law enforcement agencies along with our military will remember their oaths of office. They have sworn to defend our Constitution rather than Obama’s subversive agenda.

All traitors must be arrested and tried for their crimes. What’s ahead for Barack Obama? The days ahead appear to be very dark and dangerous. It will be Obama’s call.
Posted by Paul Huebl Crimefile News at 8/25/2009 11:18:00 AM

"defend the Constitution of the United States against all enemies, foreign and domestic; ..."

It scares me though that "we the people" could be perceived as being a domestic enemy. Under the present regime, it is totally conceivable.

After the midterm elections, he'll realize he's a lame duck. Then he'll focus on enriching himself and his Chicago Machine cronies.

After he loses in 2012 he will run for Mayor Of Chicago, if Richie lets him, then he will have some real power.

Al Qaeda understood that the only way to bring The United States down was to ruin its economy.

Barack Obama is doing their dirty work for them. In a few years, our debt will cripple our nation. We'll have a navy that cannot put to sea, and an air force that cannot rule the skies.

Barack Obama and the Dems will have rendered the United States impotent and reduce us to a minor player on the world stage.

Barack Obama is committing treason against our great nation, right under our noses. He belongs in the big house, not the White House.

Treason is a capitol offense.