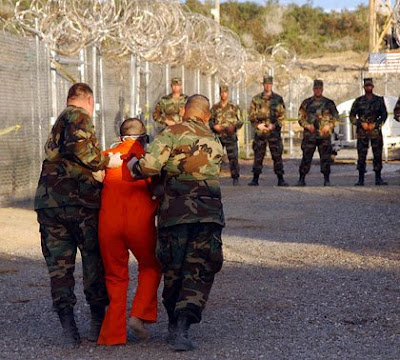 I guess he was trying to curry favor with the Bush hating anti-war folks. Obviously not much thought went into this dumb idea.

The risk is that the very people that have made a religious commitment to destroy America could gain nearly every right of Americans under the Constitution along with every entitlement.

Putting these terrorists on our own soil is dangerous and totally unnecessary. They can be humanly treated where they are without endangering Americans.

There is no real alternative except to release these combatants to their own countries. Of course that would simply reinforce the terrorist forces we are trying to defeat.

I’m not a fan of the wars of either George Bush. They are being fought Viet Nam style where winning is not the goal. We should have eradicated Afghanistan and perhaps Iraq from the map with nuclear weapons or not bothered at all.

I don’t think that keeping GITMO open for lack of a reasonable alternative would be held against Obama by voters.

I won’t hide the fact that I loathe Obama and his Marxist agenda. Is the real purpose of bringing the GITMO prisoners here to recruit them as soldiers to kill Americans that oppose Obama? I can’t seem to think of another logical explanation for bringing these killers to our soil.

If this theory is wrong and this was just a dumb idea why not simply vacate the order to close GITMO?
Posted by Paul Huebl Crimefile News at 8/24/2009 10:33:00 AM

Bagram Airbase in Afghanistan is the new Gitmo under the annointed ones regime.He is just as full of crap as Bush.

When the combatants were captured on a foreign battlefield they were not arrested by the law enforcement branch of our civilian govt. As such they were non-uniformed combatants subject according to the Geneva Conventions to immediate execution. The fact we did not do this is a credit to the humane standards of America and our Soldiers. Name ONE American soldier captured by these goblins who was returned to us alive!
Obama needs to rethink this stupid call so he dosnt act as stupidly as the Cambridge police did with Prof. Gates. In any event, these prisoners have experianced a very large upgrade in their standard of living. From mud huts to indoor plumbing. We should not be in so much of a hurry to resolve this condition, and also to remember that of the Terrorists already released most have returned to their old profession.
Lone Wolf