Obama Popularity in a Steady Freefall 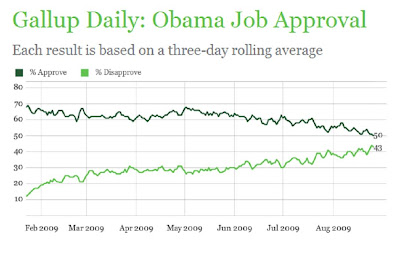 Washington, DC—Americans are discovering that Barack Obama is not working in the best interest of this country’s taxpayers and voters.

Since February of this year his approval rating fell by 20 points. On the other side his disapproval ratings soared 33 points. Voters now know that Obama’s platform and claim that all Americans making less than $250,000.00 would not see their taxes increased by a penny was a huge lie.

Americans wanted to believe the promises despite warnings from the Conservatives that Obama was pure poison for our ailing economy. Instead of tax breaks to stimulate the economy Obama gave trillions to the very thieves and scoundrels responsible for our problems.

Shoving every play in Karl’s Marx’s, Das Kapital along with GITMO terror detainees down our throats has educated Americans of the threat to liberty Obama represents.

I suspect that a real showdown will surface in a very short while forcing this traitor from our Whitehouse perhaps even to a gallows. Treason is a Capital Offense.
Posted by Paul Huebl Crimefile News at 8/27/2009 01:38:00 PM

We who have been watching know this. The sheeple who believed in hopey changey are beginning to wake from their kool-aid induced coma..........

I hope he fails. I am like "Rush". Not because he is black, because he doesnt' deserve being in the White House, he deserves surving up food in a soup kitchen as a community organizer.

If he is so "transparant",have him explain Executive Order #13489.

Have you heard about his new zar? A member of the communist party. He's a convicted felon. And still Assocs with convicted terrorist Bill Aires.
Glenn Becks got the scoop on his site.