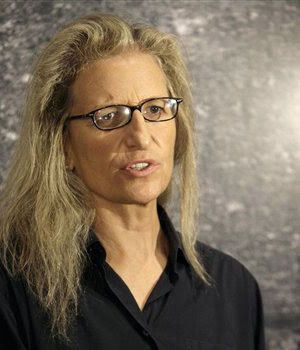 It’s been widely reported that the incredibly talented photographer, Annie Leibovitz has had monumental financial problems despite her ability to generate wealth.

Leibovitz defaulted on a $24 million loan that’s been collateralized by her famous photographs. She’s about to lose everything.

The problem here is simple drug addiction. In the 1980’s the late reporter Tom Fitzpatrick wrote about her selling her own prized cameras and lenses so she could obtain cocaine.

I don’t wish more hardship on Leibovitz even if it’s self-imposed. She is just a microcosm of the bigger problem in our country that has not nor will ever be solved by the Drug War.

Legalization of all drugs and free treatment is needed for those who have found a window to free themselves of that dreaded disease.
Posted by Paul Huebl Crimefile News at 8/23/2009 10:50:00 AM

I am not a drug user but can understand their plight. In 1984 there was a documentary produced by Jacques Cousteau's son called "Snowstorm in the Jungle". It showed the origin of the coca plants that cause so much misery to so many people. There was one particular scene where a Columbian guy who was addicted to cocaine wanted so badly to be free from his addiction that he volunteered to undergo experimental brain surgery to remove the pleasure center in his brain that cocaine affects. Unfortunately, even after this radical surgery, he found that he still craved the drug and his efforts to kick the addiction were fruitless. If someone has a chunk of their brain removed to try to quit cocaine and still fails, there is no way in hell that I would even think of trying it even once. I agree with you Paul, that this drug war needs to end and treatment should be offered whenever asked for. Seeing productive, successful people selling the very things that made them wealthy again shows just how powerful this addiction can be. Very sad.

This sad news may be behind her pimping herself out as private photogrphy teacher to the virtual fiance of the Prince William, Kate Middleton? Were they introduced by Kate's cokehead uncle?

Paul a lot of people don't use drugs solely because their illegal.

Therefore I believe that if their all legalized, well just have much more drug users, addicts and health costs due to their consumption.
I am thou all for shutting down police agencies that are not needed, ie the DEA and the CHP.

That will help our deficit.

Free healthcare for addicts? No way! It's not my problem.

"Free healthcare for addicts? No way! It's not my problem."

While I don't care to pay for this myself, I think it would be cheaper in the long run for taxpayers to pay for this rather than the much more expensive costs for law enforcement and subsequent incarceration of drug offenders. Not all drug users are destitute. Make the majority pay for their own treatment.

There's no question that the war on drugs is failing. Even now, a simple cocaine pinch will likely get tossed and the dealer goes rioght back to work.

I saw a credible report last year where they took the amounts spent on the war on drugs, and then divided it by the estimated number of addicts, it came out to around $400,000 per addict. I wish I could remember where the report was.

Anyway, it is obvious that this money could be better spent in ways that would take the profit opportunities away from drug dealers, thereby making the streets (and law enforcement) much safer in the long run.