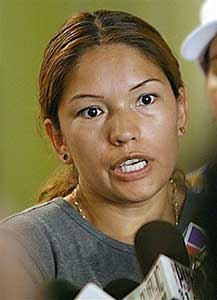 Los Angeles-Law enforcement authorities finally arrested that infamous 32 year-old illegal alien, Elvira Arellano in Los Angeles. She came here to speak at a pro-illegal imigration rally. She had recently holed up in a Chicago church for more than a year after being deported twice before, only to return again. This time her crime is a felony.

Ms.Arellano was kind enough to dump her reproductive and childbearing costs on American taxpayers and now her son born here has full citizenship rights to welfare benefits and such. She laments being separated from her son who is now an eight year-old. There is no need for sorrow when she is again returned to Mexican soil she can have the little guy in tow with her.

Since she used a church to thumb her nose at all Americans I guess it’s only fitting for the church, Left Wing, sympathizers and her fellow illegal aliens to elevate this felon to sainthood now.

When will the export of Mexico’s crime, poverty and ignorance to our country ever end?
Posted by Paul Huebl Crimefile News at 8/19/2007 04:58:00 PM

THIS ONCE GREAT NATION IS SLOWLY DYING A SLOW AGONIZING DEATH. FORTRESS AMERICANA IS BECOMING THE ROMAN EMPIRE WITH THE HORDES OF MONGRELS AT THE GATES,WAIT,I MEANT INVASION FORCE. WE ARE UNDER SEIGE IN EVERY STATE FROM THIS INVASIVE ILLEGAL UNPATRIOTIC MOB.