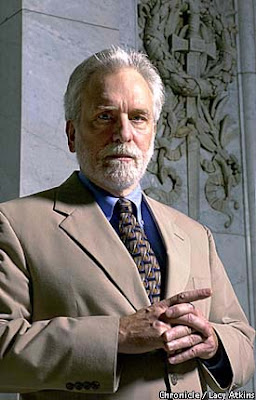 Just who is that man with the white beard now sitting at the defense table in the Phil Spector murder trial? He’s the new captain of the ship. Dennis Riordan is a renowned San Francisco criminal appellate lawyer.

Why an appellate lawyer you ask? These guys are experts in dealing with the errors of trial judges in crucial rulings that are unfair to defendants. If a defendant fails to raise an issue of a bad ruling at trial that matter can’t be later brought to the appellate level for review.

There has been an excess of questionable or close to questionable rulings made by Spector’s trial judge, Larry Paul Fidler that were adverse to fairness. That makes Riordan an excellent choice in the wake of the departure of former lead lawyer Bruce Cutler.

Roger Rosen has been the defacto lead attorney from the point that Cutler's participation was reduced to nothing.

Judge Fidler seems more concerned about his own popularity than giving Spector a fair trial. Fiddler seems to be really committed to become the only L.A. trial judge presiding over a high profile celebrity case that ends with a guilty verdict.

Is Riordan any good? Just ask Marjorie Knoller; she was a defendant in that notorious San Francisco dog-mauling case that resulted in the death of a lesbian. Riordan’s work got Knoller out of an undeserved life sentence.

Riordan did his undergraduate work at Colgate University and obtained his law degree from New York University School of Law. The California State Bar admitted Riordan to the practice of law in 1976.

An update: Because of a hasty press release Mr. Riordan's role was over-stated. He is on board for dealing the complicated jury instructions. I would not expect him to deliver any portion of closing argument.

Why do you use the term LESBIAN and not WOMAN. My daughter is GAY and a WOMAN. You need to get POLITICALY CORRECT when you write.

Political correctness is not something I tend to embrace as an ideal.

The San Francisco dog-mauling victim was both a lesbian and a woman. The one word description lesbian covers both words, lesbian and woman quite well. I was unaware that lesbian was some kind of a slur especially where she lived in San Francisco.