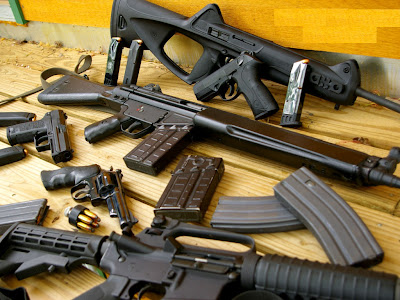 That’s what Reuters news service is saying today. These are just the guns in private hands. If this is really true, according to the gun rights haters we should be awash with blood from millions of dead children. The fact is accidental gun deaths have never been lower since statistics have been kept on gun deaths. Despite the rise in population murders don’t seem to correlate to the amount of guns in private hands.

I once heard there are 200+ million guns in the USA. There is a population of 326 million I believe,not sure if that counts the invading horde.

If anyone has a friend or relative coming on the job that has G.I. Bill Benefits they are eligible to receive the G.I. Bill payments while in the police academy now.

MIKE ARCHBOLD; The News Tribune
Ashton Pearson, a 24-year-old Army veteran, figures to make an extra $7,900 while training to be a police officer for the Auburn Police Department, thanks to his G.I. Bill benefits.
Like many military veterans, he wasn’t even aware the benefits included on-the-job training.

Some area law enforcement agencies have caught onto the benefit of the G.I. Bill in their recruiting efforts, and that’s helping fill the ranks of local agencies.

The program is called the Apprenticeship/On the Job training program, one of the Montgomery G.I. Bill benefits. It pays out monthly cash payments for approved training programs in lieu of formal schooling.

In the past five years, the program has paid monthly benefits of up to $935.85 to 138 officers and deputies in Pierce County and South King County during their police academy and field training, according to the G.I. Bill approving agency for the state Higher Education Coordinating Board.

Pearson, a four-year veteran from Puyallup who spent most of 2005 in Afghanistan as an intelligence specialist, is one of the first two veterans to take advantage of the program at the Auburn Police Department.

He will receive the training benefit on top of his full officer pay.

Pearson is still doing his paperwork, but the benefit is retroactive to his first day at the five-month academy and continues through his three months of field training.

“I think it’s great for folks changing careers and starting a new life in a new area,” he said, adding he was vaguely aware of a training benefit for union apprenticeship.

“I’ve known many a soldier who has never used G.I. benefits,” he said. And he knows exactly what he wants to do with the extra money: “Pay off extra debt and put it in the bank and save it for a rainy day.”

The program has been around for more than a decade, but not all police agencies take advantage of it in their recruiting, though they should, said Michael Ball, who directs the program-approving agency for the state.

“Most people don’t know about it,” he said. “We sent a letter to all chiefs of police, but it’s unknown whether we got to someone who actually needs to know.”

The Auburn Police Department was approved for the program in July. Brenda Heineman, the city’s Human Relations manager, said she hadn’t heard about the benefit until a veteran applied for a police officer job and asked about it.

She said she thought the program paid the difference between training pay and full pay while the city pays trainees full pay.

“To me it’s a great incentive for officers to come here,” said Lt. John Galle, interim police chief in Sumner. “It helps us recruit.”

Sumner was approved for the program in January and now has two police trainees. One veteran knew about the program when he applied and one didn’t.

The program covers more than law enforcement agencies, though they make up 65 of the 182 agencies and companies statewide with active training programs approved by the state.

Many trade unions are involved. So are fire departments. Businesses such as The Boeing Co. are on board. Ball said they have even approved a farm in Eastern Washington that put together a farm management training program for a veteran.

Currently there are 2,036 enrolled trainees across the state.

The key is having a training program in place. Police, fire and the trade unions, which make up the majority of enrolled programs, have defined training regimens that make state approval easy. Ball said the state will work with any agency or business to create a training program.

Agencies with veterans in training can enroll in the program and their trainees can received a retroactive lump sum payment for up to one year’s training.

Ball said he thinks a lot of veterans and reservists are eligible for the program but aren’t aware of it.

He said it is a big assumption that most veterans know about it. The emphasis in military recruiting ads, he said, is on college education.

The current program pays a percentage of the regular 36-month educational benefit a regular active duty military member is eligible for when he or she leaves the service. To qualify, Reservists must be in the Reserves and they receive only a portion of the regular benefit.

Ball said the monthly benefit was increased for this year but might drop 10 percent next year unless Congress extends it.

“The whole point of the G.I. Bill is to allow a person to transition from the military to civilian life and make a living,” Ball said.

It’s up to employers to make the program available, he added.

POLICEMAN IS KILLED IN THE LINE OF DUTY