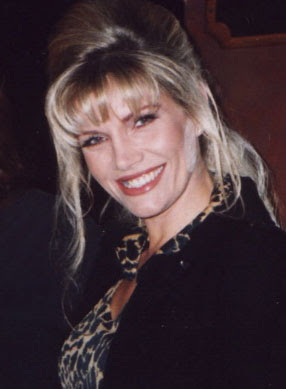 The talked about, expensive and never paid for video project was itself unleashed at the Phil Spector trial during testimony of Clarkson’s former talent agent, Nick Terzian. Testimony revealed that Terzian prudently never made that video clinker available to casting directors.

The 30-minute DVD was not classifiable as a film, comedy piece or anything other than a sad attempt at self-indulgence. Lana Unleashed appeared to be a demo reel of some sort that was 29.8 minutes longer than the attention span of any Hollywood casting director, agent, or producer.

Clarkson appeared in a wide variety of costumes in a cornucopia of scenes. The writing was beyond bad and Clarkson took on personalities and accents she obviously had not studied. Lana Unleashed would quickly bring on the end of anyone’s entertainment career. Clarkson unwisely credited herself with the directing, producing, acting and writing.

I guess Lana Unleashed was an attempt at comedy. All comedy is born of pain. This was painful to watch and really magnified Clarkson's tragic life. The clips that hurt the most were when Lana was really well costumed and downright sexy. Those scenes would be interrupted and overlapped by scenes where she looked and sounded awful exhibiting exemplified bad taste.

Not a single giggle could be heard in Judge Fidler’s courtroom during this film screening.

Clarkson could have worked with numerous amateur film groups and starred in a simple four to six minute short film that was well written and interesting. Clarkson could have taken her wonderful existing tape and hired an editing professional to assemble in a way to capture the casting director’s attention for a small fraction of the money burned making Lana Unleashed.

Not lost in this testimony was the fact that Nick Terzian who professed to be a SAG franchised agent took 20% of Clarkson’s earnings. 20% is double what SAG agents are entitled to collect from actors.

Terzain claimed that Clarkson was a top money maker but records showed that after commissions she earned less then $2,000.00 the entire time he was her agent. It’s abundantly clear now that Lana Clarkson was not well served by her agent who sent her out for non-union scab jobs.

You can judge Lana's creation youself by watching a pathetic portion of LANA UNLEASHED.

Paul,
How about a blog addressing the bizzare selection process for CPD Superintendent. You might as well tell your West Coast Chief friends to toss their names in the hat. Something is seriously amiss in Chicago...

hey did the defense atty's clear that up, about the lack of funds that she didn't get?

That video made me suicidal! God what a no talent.

did the jurors watch that video paul. if ther producer guy mentioned it, they would have to let it in.

That tape of Lana is as bad as it gets. Calling it garbage would be a compliment. She was a troubled lady witg many reasons to end her own misery.

That agent seems like a real sleazeball. On a good day you might call him a pimp.

If as he said Lana was one of his top actors that says a lot about this guy's inability as an agent.

Who has the inside track on Phat Phil's Retirement Party?

What Alderman were present?

Did Superintendent Dana Starks skip it?

How did Charlie Williams and Hiram Grau act?

Did anyone get overly intoxicated?

What "Clout Babies" were spotted in attendance?

Why is FOP #7, President Mark Donahue, making commentary and telling the Mayor to select a Superintendent from within the CPD ranks? Why no mention of Mike Mette or any press conferences for officers?

Did anyone notice that the Illinois "Top Law Enforcement Officer", Attorney General Lisa Madigan was absent?

How many people were in attendance?

Cline’s big retirement party comes a day after Mayor Richard M. Daley told the police board to reopen the search for Cline's successor, and at least one possible candidate was in attendance Friday night.

Cline spent the evening patiently shaking one hand after another, as hundreds packed the Hyatt Regency's Grand Ballroom to wish him well.

"His concern for the safety of the people was very clear, his desire to work with the clergy, particularly, I became aware of… and I just have great respect for him as a man of integrity,” said Francis Cardinal George.

The question remains: who will replace him?

That may be what the Fraternal Order of Police wants, but after narrowing the search down to three candidates last month – Chicago deputy superintendents Charles Williams and Hiram Grau and an East Coast chief – Daley wants it reopened. Current acting superintendent Dana Starks wasn't interested before, but has changed his mind, saying Friday night he will consider giving it a go now that the search has reopened.

Former Chicago cop and Washington, D.C., chief Charles Ramsey, who was passed over in 1998, is now another possible candidate.

Daley says it's all about finding the most qualified person. Starks says he respects that.

Cline spent the better part of four decades on the force and was, overall, well-respected by his officers.

He decided to retire after a series of police abuse scandals.

Lana Unleashed need to be put back on a leash! That was as bad as it gets.

I don't know if she killed herself but she sure killed her career with that crappy demo.

Considering she was on both narcotics and .12 alcohol, suicide or accidental shooting with a loaded gun makes sense.

Lana unleashed showed Lana as many different characters which is in keeping with how the different witnesses are describing her at Spector's trial. Who was Lana. Her picture is not clear.

We don't know if she was suicidal as we never witnessed what was going on in her head and the evidence conflicts. However we do know she was prone to serious "accidents" in front of other people.

When I think of Lana I think of Hitchcock's Madelaine in "Vertigo" - because to each friend of Lana Clarkson she left a very different imprint. Is it true that Lana like any good actress was - who they wanted her to be?


So was the real Lana,

was she just "accident" prone,

Or was she murdered when she took too much of a risk - by going to a Pyrenees castle with a strange man at 2 oclock in the morning?

That video really showed how Clarkson's acting career was over.

That agent could not book Clarkson for some real SAG film roles.

The part with her in the cop uniform looked like it might have been interesting. Maybe you should've posted that one instead of the most unflattering one?

Paul, why do you hate Clarkson so much?

I don’t hate the tragic Lana Clarkson. She’s a victim, not of murder but of a horrendous, post mortem invasion of privacy as a direct result of a flawed prosecution. The sad and ugly part of Clarkson’s life would never have been exposed but for this trial.

The entire 30 minute Lana Unleashed can be seen on the KTLA-TV website. My criticism of Lana Unleashed is well founded. Watch that thing and you will lose 30 minutes of your life you’ll never get back.

I can only view this case on the real evidence. The limo driver lied about seeing the gun in Spector’s hand. The driver saw the opportunity for a Green Card if he was of some value to the prosecution. The driver claimed to see a black gun with brown grips in Spector’s hand. If that little Colt Cobra .38 was in Spector’s hand as the driver described and demonstrated, he would not have been able to see any portion of the grips. The driver did see the gun on the floor by Clarkson’s feet.

This is a case that screams reasonable doubt. The problem is Spector is not receiving a fair trial because of the recently changed California evidence code that allowed decades old allegations (no criminal convictions just accusations) into evidence against Spector. The prejudice far outweighs the probative value of bringing this trash into the evidence mix.

A female juror on the Phil Spector case has been posting hate comments against Phil Spector on forums maintained by Court TV and KTLA-TV. The defense has her internet service provider’s records. The defense has their investigators out trying to get the ISP records of every member of the jury. Stay tuned.

Does anyone believe that actresses don't kill themselves?

And as a sidenote, many of these were described as "about to turn her life around" or "things were starting to pick up for her" or similar phrases.

Lana must have been unable to see how embarrassing bad her promotional video was - which didn't do her justice. She was a beautiful woman after all.

But a bubbling and ugly Little Richard with a sickly voice - that wasn't funny - and especially not now - it is just - very sad.

Lana did have some talent which just needed to be channelled in the right direction,

Lana took her first wrong turn when she broke both her wrists in the Hollywood Hills. I think it was all down hill after that.

Anonymous said...
"Lana took her first wrong turn when she broke both her wrists in the Hollywood Hills. I think it was all down hill after that".

Another odd thing is how many of these actresses got into bad traffic accidents and had serious problems after that. Also, a surprising number died in fires. Many died from excessive alcohol usage. Talk about doomed.

See "Fallen Angels" by Kirk Crivello, a book about the deaths of pretty actresses.

Lana's agent could never get her enough work to help her support her narcotics addiction. That was the most depressing thing of all to Lana.

It looks like I may have had a visit from the great Oscar winning actress Louise Fletcher. I think she is friends with Lana Clarkson's agent. She' is not happy with my story.

Paul, your comments couldn't be more right on! Not to mention the fact that playing a black face is soooo racist! But the entire thing was completely embarrasing. I think she would have been better off NOT having a real. Boy, having to sit in the courtroom and watch the whole thing was a very difficult thing and uncomfortable task to undertake. But remember, the prosecution says she was soooo successful and happy and positive....well if I had that guy as my agent, I would be broke also and have to get a $9/hr job. One can't even pay their rent with that kind of salary. The whole thing is embarrasing...I won't continue...

So long as it is Louise Fletcher that wants to visit you - and not Nurse Ratched...

And we should all say a prayer for the Crimefile...