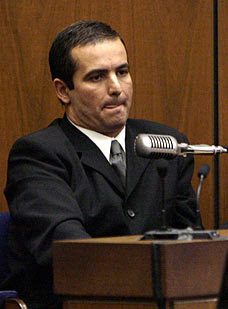 I’ve already shown earlier where Adriano DeSousa lied about seeing a gun in Phil Spector’s hand. Was it really a lie or just a mistaken impression at the scene of a horrific tragedy?

We all now know that Mr. DeSousa was working here on an expired visa and breaking the law. DeSousa’s deportation is in the hands of prosecutor Alan Jackson and Pat Dixon who have the unique power to gain cooperation from ICE to provide a coveted Green Card in exchange for needed testimony.

DeSousa desperately needed Jackson and Dixon far more than he ever needed Phil Spector. Imagine just how fast DeSousa would have been deported had he not twisted the facts in a way that was useful to the prosecution theory?

I have a simple explanation of the real exchange between Spector and DeSousa on that horrible February morning in 2003. Lana Clarkson killed herself either on purpose or by accident. There is no dispute that Clarkson was both drunk and under the influence of dangerous drugs. Further I believe Clarkson found the gun while rumaging through Spector's property and assumed it was unloaded.

Phil Spector in an understandable panic frantically tried to help Clarkson by cleaning off her wound and trying to stop bleeding. Spector ran out side to summon help from Mr. DeSousa. Phil Spector is no great orator. His voice is raspy and soft and has always been that way. DeSousa spoke somewhat limited English and probably did not quite hear or really understand what Spector told him. The loud water fountain also plays into this mix.

Phil Spector wrongfully assumed that Mr. DeSousa understood what he was told and returned inside his home. Spector apparently felt comfortable that DeSousa called for police and perhaps an ambulance. Spector waited for the police and when they arrived admitted them into his home but was treated not as a witness but as a suspect.

The shock of the entire event took its toll on Spector and he simply failed to move as quickly as police wanted. The result was that Phil Spector was shot with a police Taser Gun. I can’t imagine Spector being coherent after that morning’s events.

The cops now had a civil liability problem. If Phil Spector is not convicted of a crime he will be able to sue the police for the wrongful Tasering. Was that the motivation to make a case for Murder against Phil Spector?

Despite the fact that Adriano DeSousa’s testimony is full of holes it was bought and paid for by prosecutors. That, as the prosecutors manipulated DeSousa’s future.

During the trial the prosecutors vilified Phil Spector for washing his hands. Blood has been recognized as a biohazard for decades now. We all must avoid getting blood on our skin and wash it away should that happen. Washing blood away from your own skin is not evidence tampering, its simple survival!

It really all boils down to who held and fired the gun killing Lana Clarkson? The DNA evidence had no reason to exclude Phil Spector as the limo driver had to say what prosecutors wanted to hear.

Love your site and yes knowing Phil Spector, you are right on!
Thank you.
Joyce Danelen at yahoo dot com

In this terrible situation - there must have been a great pressure on Adriano De Sousa who was frightened to protect himself from the fallout - but Adriano knew he could not protect himself without giving himself up to the authorities and thus so as to protect his position further De Sousa may have been motivated to take advantage of Phil Spector's plight - to secure a work permit for Adriano DeSousa in the United States.

Adriano De Sousa's needed to sever the relationship with Phil Spector after seeing Lana Clarkson dead- and as Spector had shown Adriano his vulnerability - this showing - opened up the possibility for Adriano to BETRAY his former boss - especially as he had motivation to BETRAY his former boss to obtain a GREEN CARD. (Note: I have experienced this kind of betrayal with the person gaining a job in payment for her betrayal)

Spector's chauffeur Adriano DeSousa was working illegally in US without a work permit on Feb 3 2003 and testified to what he thought Spector said to him immediately after Lana's death.

Is this trial all because Adriano De Sousa did not have a work permit to work in US and did not want to be tied in to murder or deported from the USA?

Since Feb 2003 De Sousa has not had any independence from the California authorities in any way shape or form as he is not a resident of US.

Because of Adriano De Sousa's Immigration Situation the Chauffeur Adriano De Sousa can be used by the California Prosecution like a puppet to say things against Phil Spector which may be entirely a pile of crap, especially when De Sousa has no independence from the Prosecution or the USA authorities.

for instance this is proven by the people who jumped out of the World Trade Center in NY on 911.

When people fear for their lives those that are alert will try anything to save themselves it does not matter if the act is futile or not as the people don't know if the act will be futile they will try it anyway the adrenalin drives them to seek safety.

De Souza on Feb 3rd 2003 who had seen the corpse - had a motive to make up his story against Spector so as to get out of being a murder suspect. Once DeSouza started his story he could not turn back.

You go to a strangers home in the wee hours of the morning and rummage in his belongings looking for a gun to kill yourself with and he doesn't notice because he is too drunk or not able to think because that viagra tablet he took pooled all the blood from his brain to his lower regions!

Did anyone investigate whether DeSouza and /or Michelle Blaine knew Lana Clarkson? DeSouzxa's first call was not to 911 but to Michelle Blaine, supposedly because he had to ask her for the address to Spector's house(as if he didn't know it, even thouigh he worked for Phil and driven to and from his houise many times). That was total BS, and it indicates that he and Ms. Blaine may be the key to unlocking this whole puzzle.