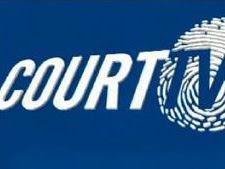 I remember when I thought the concept of Court TV was laid out as a place to watch gavel-to-gavel coverage of high profile trials. That sounded so simple and so sincere that it had to be a good idea. During court breaks there were correspondents that took the neutral approach and reported on what happened but later the anchorharpies arrived on the scene led by Nancy Grace.

The objectivity ended and the prosecution was aided on every trial by the anchorharpies misstating the testimony to the viewers and of course those members of various juries that were violating rules about watching news coverage of the trials they are supposed to be serving. The actual courtroom coverage began to shrink in favor of a pro-prosecution and pro-victim’s rights infotainment platform.

KTLA-TV has real gavel-to-gavel coverage of the Phil Spector Trial. The bad part of the KTLA is during the breaks when Marta Waller rambles on with a pro-prosecution slant while insisting she is somehow neutral. Since they don't trade real trial coverage to hear Marta's opinions KTLA-Tv's web site is a far better place to see that trial. Perhaps when all the evidence is in Ms. Waller will learn a little from Judge Fidler's bias and Alan Jackson's win at any cost methods.

The Internet brought us forums for Court TV and other media outlets inviting the general public to comment on the trials. Even before the opening statements are made the good people on these forums have taken the side of the prosecution. They are the modern day lynch mobs.

These trial junkies cry for the so-called victims and demand maximum punishment for every defendant even before the first witness is sworn. Should posters dare offer an alternative view other than guilt, the resident posters demand that the poster be banned as some kind of a disrespectful victim hater. These trial wathers have the view that if any defendant who is acquitted is the result of a stupid jury.

My blog has been ravaged by at least two such forums, Court TV and KTLA-TV over my coverage and commentary of the Phil Spector Murder trial. My name has been taken in vain and they’ve called me everything but a human. I guess being singled out by these lynch mobs as a venom target is not such a bad thing.

Many of my readers notice that I only cover cases where I see injustice. Most of the high profile trials seem to be on the square and don’t need my attention. For the people on these trial watching forums, they need to live in a place like China where people are tried and executed with lightening speed often for far lesser crimes than murder.
Posted by Paul Huebl Crimefile News at 8/29/2007 05:24:00 PM

This country is allowing uninspected Mexican truck drivers on our roadways on Labor Day. This is for real.

ALL IN THE NAME OF CORPORATE GREED,THE SELLING OUT OF AMERICA CONTINUES.

VOTE FOR RON PAUL FOR PRESIDENT

TAKE AMERICA BACK BEFORE IT'S TOO LATE!!!

I have been on the boards you mentioned, and I absolutely agree. Many of these bloggers took a guilty stance before the trial even began. Now, even after hearing all the evidence and testimony, they continue scream guilty due to "personal" feelings they have toward Spector. It has nothing to do with justice. I can't even post without being slammed or bashed. Even better, I'm accused of being one of "THEM" Apparently, many people actually believe that the defense team has placed NG Bloggers on the message boards to help bolster their case to the jurors who are supposedly combing the boards. Ridiculous!

So many jumped on Badens credibility due to his income from this case, and the fact that his wife is on the defense. Baden is a respected forensic pathologist who has testified for the prosecution much more in the past than he has the defense. I find him extremely credible. His wife has nothing to do with his testimony, and why shouldn't he get paid the big bucks? He's the best in the field.

If we want to talk about witnesses credibility, or should I say lack thereof.....

DeSouza- A hired hand who saved his own butt by testifying for the prosecution.

Diane Ogden- An over the top drama queen, who cried fake tears.(but never shed one) The very first thing she said on the stand was what city and state she lived in. No one asked her. I found that very strange. Why would a woman who wanted anonimity, and who was still frightened by Phil Spector tell everyone where she resided? That really bothered me.

Robitaille- Laughable. That's all I have to say. No credit there.

Dr. Pena- Also over the top. I wondered why this man was so animated while talking straight to the jurors with every answer. Glancing at the cameras and such. Then I saw him on a commercial for an upcoming show North Mission Road. Things that make ya say hmmmm