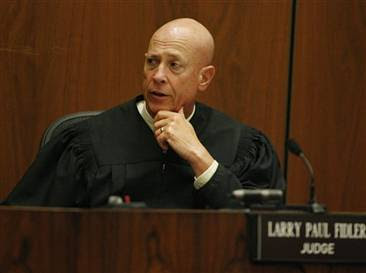 Judge Larry Paul Fidler has been grossly unfair to Phil Spector with nearly each and every ruling during this trial.

Judge Fidler has allowed nearly anyone on the planet to make allegations of decades old assaults even though no police reports, prosecutions or civil lawsuits ever tested the veracity of the claims. The prejudice of the material against Phil Spector far outweighs any probative value.

Judge Fidler has taken the defense lawyers to the woodshed repeatedly for badgering witnesses while allowing Prosecutors Alan Jackson and Pat Dixon to abuse defense witnesses without sanctions.

Judge Fidler’s findings that labeled renowned forensic expert Dr. Henry Lee as the “least credible witness” during a trial while the jury is not sequestered was beyond outrageous. Only a fool would believe that ruling was not published to members of the jury. The entire point of that contest quickly dissolved when Sara Caplan revealed that the object in question was not a small portion of Ms. Clarkson’s thumbnail. The label of, “least credible witness” has never been lifted from Dr. Lee by Judge Fidler.

Because Phil Spector is wealthy and famous his detractors/prosecution “witnesses” have been rewarded with fame, cash from tabloids and other possible financial benefits. Oddly enough despite these despicable claims of extreme violence, Spector has not physically harmed one person in his 67 years on this earth. That fact alone makes the allegations by Spector’s former bedmates suspect.

Judge Fidler has been caught up in the spotlight of being the ringmaster of a circus instead of a judge presiding over an inquiry into the death of Lana Clarkson and an allegation of murder against Phil Spector.

Judge Fidler lost any objectivity long ago. Judge Fidler should recognize that fact, declare a mistrial and recuse himself from all further proceedings. The jury has been tainted beyond repair.
Posted by Paul Huebl Crimefile News at 8/16/2007 10:41:00 AM

Judge Fidler must hate Phil Spector or his lawyers. Larry also loves the spotlight and I suspect that the TV coverage has caused him to stray from his normal self.

I've been hefore him several times as a defense lawyer and have never seen him so Hell-bent on tipping the scales.

What a well-written and thought-provoking commentary about Judge Fidler!

His bias against Spector and his lawyers dominates the courtroom along with Fidler's buddy Alan Jackson who appears to have a free pass for obnoxious behavior.

Fidler should get off this case NOW!

I couldn't agree more with this article. He is doing everything possible to make sure Spector gets sentenced. Thanks for writing the article.

I couldn't agree more. His handling of the whole Lee issue was blatantly biased and the Nick Tananzo affair no better.

He should just instruct the jury to hand over a guilty verdict now and get this trial over with. His rulings have indeed turned this trial into a joke.

Why are there even jurors on this case, when the judge deems who is credible and who is not. For example, Caplan was more credible than Lee. Wasn't that for the jurors to decide? What Fidler did to Lee was a disgrace.

The judge should be thrown off the bench for his actions in the Phil Spector Murder Trial:

"....After years of grabbing negative headlines for losing the OJ Simpson double homicide case and other celebrity trials, involving the same three participants, it was inevitable and predictable that the Los Angeles criminal injustice system via Robbery Homicide Division would administer their personal vendettas against me, Dr. Henry Lee and Dr. Michael Baden. That moment arrived in 2007 when music mogul Phil Spector was charged with the murder of Lana Clarkson and the case was "assigned" to judge Larry Fidler. Revenge by the LAPD Robbery Homicide Division would be a "MF"and "MF" didn't stand for Mark Fuhrman...."

"....Exposing the truth is never in the interest of those who suppressed it and eliminating the messenger would have to be carried out with precision by the Los Angeles Police Robbery Homicide Division and their protectorate, the Los Angeles District Attorney's Office. Knowing that it was only a matter of time before the OJ Simpson facts would be re-calibrated in my "Guilty of Incompetence" expose, the Los Angeles District Attorney's Office and the LAPD Robbery Homicide Division in the Phil Spector's (2007) murder trial usurped the Los Angles Superior Court and Jude Larry Fidler, to falsely allege that Dr. Henry Lee, myself, and Dr. Michael Baden, were involved in a bogus "obstruction of justice" crime...."

"....The judge in the televised Phil Spector trial, on behalf of his friend Deputy District Attorney Patrick Dixon, creatively, albeit injudiciously, granted the LAPD Robbery Homicide Division the commensurate authority to "investigate" the disappearance of non existent "evidence" that was allegedly removed and or discarded by member(s) of the defense team, while conducting an examination of the Lana Clarkson's accidental suicide shooting scene...."

"....The "missing evidence" and or the "obstruction of justice" investigation was conveniently assigned to Robbery Homicide Division (RHD) investigator Victor Pietrantoni, a key player in the OJ Simpson criminal investigation. What a "happy coincidence" that this case would end up in the lap of Detective Victor Pietrantoni the RHD stud who was nicknamed "Casanova" because of his steamy relationship with a high ranking Los Angeles Deputy District Attorney. As my old LAPD Puerto Rican partner would say, "F----g a lawyer, especially a district attorney is the ultimate high for a cop and the fastest way to climb the ladder of success...." To be fair, Victor Pietrantoni is just one of many LAPD officers who are incestuously connected and or married to members of the Los Angeles District Attorney's Office, The City Attorney's Office and or to the jurists assigned to the Los Angeles and Orange County Superior Courts. Allowing Victor Pietrantoni (on behalf of his wife, DDA Patrick Dixon and Judge Fidler) to conduct an impartial obstruction of justice investigation was tantamount to allowing the fox to investigate who broke into the hen house...."

"....Instead of recusing himself and or convening the Grand Jury to investigate the false allegations which were revolting, contemptible and based on perjurious witnesses, the luminous Judge Larry Fidler took a page from the "Spanish Inquisition" period and used his black robe, minus the hood, to lunch a personal, vicious, unethical and unrelenting smear campaign against Dr. Henry Lee, with one objective in mind; to publicly humiliate and destroy Dr. Henry Lee's professional reputation, knowing that he can do it with impunity while hiding behind his judicial immunity...."

"....It should have come as no shock to Judge Fidler that dishonesty was compulsory in much of Robbery Homicide Division and that Judge Fidler's colleagues at the Los Angeles District Attorneys Office have shown an affinity for using the grotesque Robbery Homicide Division to once again, dispense their own form of perverted justice trough manufactured and rigged investigations...."