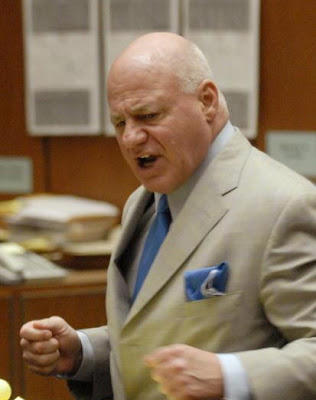 Legendary rock producer Phil Spector needed a legendary lawyer to represent him on that murder charge. Spector had more than his share of difficulties with the lawyers who have gotten huge retainers for their services. Picking a lawyer to help negotiate the mine field of a criminal courtroom is no exact science. Courtrooms are not the place where the merits of guilt or innocence stand on their own.

Injustice happens in courtrooms every day. There are lies, manipulated and manufactured evidence along with malicious agendas everywhere. If the right result is obtained it’s too often for the wrong reasons. Our system in just not what it’s cracked up to be. It’s more like Las Vegas only with higher stakes.

After the failed representations by Robert Shaprio and Leslie Abramson, Spector settled on New York mob lawyer Bruce Cutler. Cutler has style and the reputation as a heavy hitter. Some will argue that Cutler is more of a showman than a lawyer.

In any event Cutler was castrated early into opening statements of the trial by a prosecution slanted jurist, Judge Larry Paul Fidler. As a result the entire thrust of the opening defense statement became a train wreck. Another lawyer, Linda Kinney Baden caught the ball and ran with it saving the day.

The elegant and effective Roger Rosen was originally picked to second chair this trial for Cutler. After a few humiliating judicial slaps Cutler quickly became no more than a courtroom potted plant. I suspect that there were some really contentious conferences for the defense team to attend. Instead of a lawyer Spector hired a committee and getting a group like that to agree on anything is a challenge. The defense seemed to stumble in direction from the beginning.

This morning Cutler stepped aside and is no longer part of the defense team. Cutler never really seemed to fit into this trial after being so rudely slapped down by judge Fidler in front of the jury. Cutler should have left long ago because as a defrocked show pony he only became a distraction.

Will the jury give Phil Spector the benefit of the reasonable doubt? Has this trial become some kind of a sick exercise like the Romans used to bring to the Coliseum loaded with betting spectators waiting for a thumb up or thumb down?

We’ve seen a lot during this trial of everything but evidence that Phil Spector held the gun or pulled the trigger causing the death of the disturbed Lana Clarkson.

Only a raving moron would have hired "Kuntner" a guy who defended John Gotti. This only shows how mental this Spector jerk truly is. He's out of his mind now that his little gun trick bounced him into court in the first place. He'd been pulling it for years but this time it went off and killed this poor slob of a girl. I'm so happy that Spector hired Atty. "Kuntner" as it showed everyone, jury included exactly what a whack job Spector truly is. I think he built one too many walls of sound and the noise rotten his drugged up mind. Get it over with already jury and shoot the injection into this animal - it's more human that what he did to Clarkson. Just a retired copper.

Paul, As usual you've nailed this story better than anyone! Judge Fidler was over the top when he insulted and berated Cutler in front of the jury.

Rosen has all the class as you so well described.

As for reasonable doubt I see it but will the jury?

Paul it's too bad you did not work as a defense investigator for Spector but I'd have never been able to see your blog about this trial. Keep up the good work!

Let us get things straight. First there is no justice - only money.

Second - Bruce Cutler a nice gentleman from New York had no option but to quit this trial because of Judge Larry Fidler's demand that Cutler not probe the Prosecutions' female witnesses testimony to deeply for cracks and flaws below the surface.

Let us not forget that Bruce Cutler is a legendary New York lawyer who became a stranger in a strange courtroom who got shot down and gagged by Judge
Larry Fidler.

Bruce Cutler was prevented from representing his client -Phil Spector, because of Larry - Fidler of the Courtroom.

Paul you are right this trial is like Las Vegas only worse - because the litigant's life is wasted, and if you are lucky -if you have money to pay for the right top lawyers then and only then might you prevail. But there is no guarantees.

And it is just a crap shoot. Costing a million dollars for each crap.