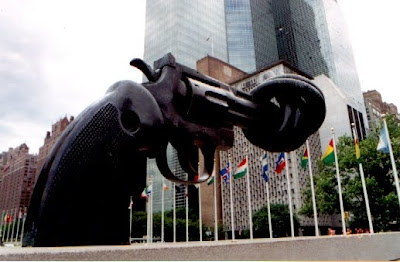 New York, NY—The United Nations was created and exists with the promise of giving nations a place to debate and settle their differences without mortal combat. That was the grand theory.

Instead the UN has become a puppet of the voting majority. Larger nations with dismal histories of human rights never get sanctioned. The majority pursues policies that make genocide and enslavement easier for despot leaders.

One only has to study the last 60 years of African nations to see that slaughter after slaughter was ignored and ratified by UN inaction. When the UN arrives it’s always too little, too late.

Today the UN as we know it wants to strip the people (individuals) of the world any right to possess firearms. This is the number one enabler of genocide as we know it. There is no holocaust on earth anywhere people have the right to keep and carry firearms. On the contrary, preceding every case of mass murder governments first stripped the people they murdered of firearms.

In every case, before they murdered the despots always claim to the people they’d later kill that the gun grabbing was for their own safety. This more than ever proves that what’s past is prologue.

The UN needs to either reassess their goals or disband. Their existence has become fraudulent since they enable the misbehavior of governments rather than improve anything at all.

The goal of the UN should be to train and arm every Law-abiding citizen on earth so they can defend themselves, families and nations. This would give parity to the formerly defenseless and stop genocide cold. Instead the UN seeks to turn their citizens into unarmed frightened sheep ripe for government atrocities.

Today the UN wants only favored governments to possess any arm at all. They are on a major march to disarm and prevent ordinary people to resist the despicable slaughters throughout the world. This effort is setting back Human Rights in a way that would make Adolph Hitler proud.

The UN is run by government leaders living high on the backs of their citizens. Power corrupts and absolute power corrupts, absolutely. Under today’s UN policy governments leader are handed absolute power when there are no armed citizens to resist tyranny.
Posted by Paul Huebl Crimefile News at 5/08/2011 11:34:00 AM

As it pertains to the U.S., the enforcement of these 'gun control' laws fall upon the state, county and city/town law enforcement agencies.

Our Federal Constitution currently prohibits our federal government from invading each State of our Union to impose any federal law which attempts to disarm our citizens.


Only if our local law enforcement agencies choose to attempt to disarm their citizens will there be the need for the citizenry to resit said attempts, by whatever means necessary.