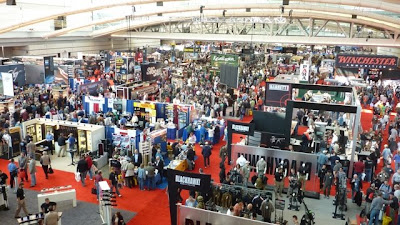 Pittsburgh, PA--I spent several days in the Steel City attending the National Rifle Association Annual Meeting and Gun Show. There were a lot of visitors and it seems the projected attendance of 70,000 may have materialized. The mood was mostly somber about the state of our nation. Most here believe our nation and its freedom is on the ropes.

Barak Obama and his Czars continue to be the greatest firearm and ammunition marketing agents of our lifetimes. The fear of gun confiscation has been replaced with potential for civil war. Politicians have been denouncing freedom by continuing to push their Socialist agenda. I guess they don't realize millions of Americans are more than willing shed blood protecting our Constitution and the freedoms outlined in the Bill of Rights if needed.

Extortionate taxation is enslaving working Americans that are now being victimized even more through skyrocketing gas prices that insures runaway inflation. The current energy crisis is the design of the Obama Whitehouse that refuses any efforts by Americans seeking to harvest vast oil sources within America.

Unemployment aggravated by fuel prices is a national emergency that will soon bring anarchy to our streets if it continues unchecked. Each tax, food or fuel price increase costs jobs and that's just what the Marxists of the world want.

Americans must survive the effort to turn this nation Socialist by any means necessary. The Right to Keep and Bear Arms was intended as a tool to keep our country strong and free. Perhaps the time has finally come when our government's tyranny is challenged since the politicians we've elected have become traitors.

The shocking revelations of the Whitehouse and BATFE conspiring to ship arms to Mexican drug traffickers as they blame our gun rights for Mexico's drug carnage were no small topic of conversation. That, while these same traitors backdoor a suspension of our freedoms through an ongoing United Nations treaty, power grab is beyond outrageous.

I have no crystal ball and can't predict the future beyond one thing that never changes, and that is, what's past is prologue.
Posted by Paul Huebl Crimefile News at 5/03/2011 02:35:00 PM