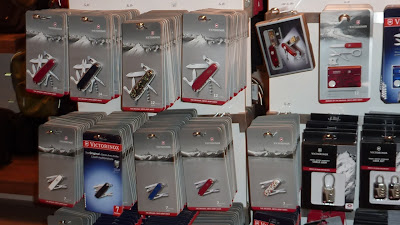 Geneva, Switzerland—As I left Geneva Airport bound for Amsterdam during my recent trip I was screened for weapons. I cannot complain here be cause I have no right to claim under the Fourth Amendment outside of the United States.

They searched me, and my carry-on bag allowing me to pass on to the boarding area. On my way I passed the duty free shops where all kinds of goods could be purchased. That included Victronix a Swiss Army Knife maker! I could now by a knife for my trip!

When I arrived in Amsterdam things were very different. They gave us the full TSA punishment including the Naked X-Ray. I would have had to place my new Swiss Army knife in my checked baggage there for sure. That is unless I chose to outsmart or outshoot the unarmed security workers.

As always the security is only as good as trained armed cops are allowed to make it. There was a shortage of them in Europe also.