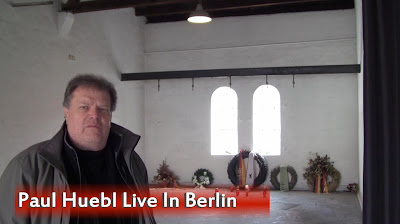 Berlin, Germany—During a major crisis of unemployment, massive national debt and starvation two political parties, Communism and National Socialism fought for power. Their plans to redistribute wealth and control private enterprise, was identical to what Karl Marx envisioned. We know the National Socialists or the Nazis won that political battle.

The Nazi leader, Adolph Hitler had secret plans to capitalize on the unpopularity of Jews and others to the point of mass murder. So began a 12 year administration of terror, corruption and mass murder. Before it was over six million people mostly Jews were annihilated by this criminal regime. What they never talk about is that the Nazis were also directly responsible for the deaths of nine million good Germans.

What’s amazing was the rise to absolute power of a man who was considered a great new progressive world leader. He was a man who’d grace the cover of our own Time Magazine as, “Man of the Year”, Adolph Hitler. Hitler exists today in every nation. He’s waiting to get absolute power from naive people that love and trust him. Hitler will rise again to unleash more horror if we don’t stop him.

We must always remember, what’s past is Prologue.

I had the pleasure to live in Germany during my military obligation during the Viet Nam War. I’ve also been back several times since. I speak German and know my way around this beautiful country.

Over the decades, I have studied Nazis, Hitler and the Third Reich carefully out of a morbid curiosity of trying to learn how a nation would allow tyranny to rule.
Frankly, I still have more questions than answers. I only know this can and will happen again.

This criminal/political phenomenon is amazing to say the least. It is an intriguing study to say the least. I’m in the planning stages of organizing a tour in Germany of people that want to devote three weeks to visit the historical sites of the Third Reich.

The trip must begin in Munich, the site of the deadly and failed, November 8th 1923, Beer Hall Putsch where it all began it must end in Nuremberg where Nazi war criminals were tried and hanged.

The must see locations are in or near Berlin, Munich, Nuremberg, and Obersalzberg.

The 8 Prinz Albert Street, Berlin headquarters of the Gestapo and SS operations where investigations, began that included torture and ended in a trip to the People’s Court. A terror museum stands there today next to the ruins of the original building.

Berlin’s German Resistance Museum is located at the Bendlerblok. This place is dedicated to the thousands of Germans murdered by the Reich for resisting Hitler and National Socialism. This is the site where Col. Claus Von Stauffenberg worked and plotted Hitler’s assassination attempt of July 20, 1944. It is also the site where he and his co-conspirators were put before a firing squad.

The Sony Center site is the location where the People’s Court tried and condemned Germans to death for trivial things such as passing out anti-Hitler leaflets. Here you will learn about Judicial Tyranny and the ringmaster of the People’s Court, Dr.Roland Friesler.

Berlin’s Plotzensee Prison’s death chamber memorial is where the men and women that resisted the Nazis were beheaded or hanged on piano wire. In just a single night nearly 300 people were hanged in this somewhat small room.

The beautiful Lake Wansee Villa is where in 1942, 15 elite Nazis gathered to formulate the Holocaust over a two-hour luncheon that was documented in a captured stenographer’s transcript.

The site of the Spandau Prison is where Nazi war criminals who escaped hanging served lesser sentences they were given at the Nuremberg tribunals. Rudoph Hess was the last prisoner held here until he hanged himself in 1989.

The University of Munich is where the group known as The White Rose met and distributed leaflets. Dr Roland Friesler flew in from Berlin to preside over their trial. Among the murdered was 21 year old Sophie Scholl who along whith her brother Hans Scholl and their friend, Christoph Probst who were beheaded at the Stadleheim Prison.

The Memorial Site for Dachau Concentration Camp is also near Munich.
The remains or the Berghoff and the Eagle’s Nest high in the mountains at Obersalzberg are where Hitler commanded his Total War. The view here is breathtaking to say the least.

Nurnberg Hall of Justice where the primary Nazi war Crimes trials were held. The prison and site of the hangings are nearby.

Hotels, great food, and some important free days must be part of this trip.

I also have some must see films to suggest that recreate the historical events at the various locations.

If you’re interested in taking this tour click on my picture on the right side of this blog and e-mail me.

Now sit back as watch a few videos I put up that show some of these sites:

And if we do not maintain an armed populace in America we will wind up like 1933-1945 Germany.Evil is always lurking and the next Hitler is just chomping at the bit.

Paul, as a follow-up, do a story on the 12 millian German ethnics murdered by the commies after the war. I have a CPD buddy (retired) who spent a year in a concentration after the war. His father was dead. His mom and siblings where with him. They were given one potato each per day. They were Germans held in what is now Poland. Also, check out Operation Keelhaul. It will make you ashamed of what the US govt. did to those people.