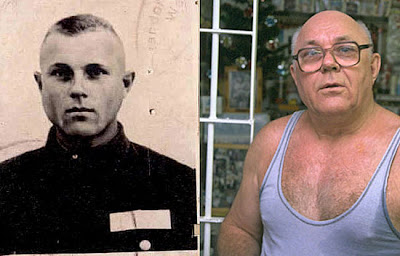 Munich, Germany— John Demjanjuk like all Ukrainian able-bodied men were rounded up by the Nazis during World War Two and forced into slavery. Demjanjuk was forced to work as a guard at the Sobibor, Poland concentration camp where thousands perished from untreated diseases, old age, starvation and of course mass murder.

There were other prisoners forced into the same guard duties at Sobinor but they were Jewish Kappos. Although a few more notorious kappos were beaten or killed by camp survivors when the Russians liberated them, none were ever put on trial for war crimes.

Demjanjuk was simply a tool used by our own government’s Office of Special Investigations to justify their existence. OSI was funded to identify and locate war criminals that were suspected of fleeing from justice and hiding in the United States. Their record at success was dismal.

In the Demjanjuk case the OSI falsely identified him as a notorious criminal dubbed as Ivan the Terrible and nearly got him hanged in Israel. OSI produced a phony identity card that finally was exposed as a blatant forgery by the well-respected document examiner Bill Flynn of Phoenix, Arizona. The sentence of death and conviction was reversed and Demjanjuk was set free to the major embarrassment of the OSA agents.

OSI simply made another case against Demjanjuk and got him prosecuted as a different person this time in Munich. Again the OSI won a conviction. Okay, we must hold our nose because of the foul odor here.

Germany has suffered the guilt of the 12 year Nazi regime for 66 years to date. The children and grand children of Germany had made every possible concession they could to the world’s Jews and continue to do so. Trying suspected war criminals on weak or meaningless evidence is just another way to satisfy the German debt to the Jews.

Of course when it came to war criminals that the United States needed there was no OSA nor was there extradition nor trials anywhere. Was there a double standard? There always is a double standard in the real world.

Demjanjuk’s trial began on November of 2009 and ended today with a forgivin five year prison sentence. At its very best this was a case of symbolism over substance since the frail Demjanjuk will be spending the limited remaining years confined to a nursing home. Now it may be at the expense of the German government.

With respect to any appeal the reality is that would take more time than Demjanjuk has left.

This is the last chapter in a 30 year effort by the OSI to scapegoat Demjanjuk. The power of government is indeed awesome.

This also seems to be the last legal chapter in a monumental crime against humanity. It was not the German people but some committed Nazis operating with a tyrannical secret government responsible for the deaths of six million Jews and nine million Germans.

In an act of mercy the court odered Demjanjuk freed because of his health and age. The question is where does he go from here since his American citizenship was revoked? Is Demjanjuk a man without a country today? Will Germany deport him? Munich is not a bad place to spend remaining years at all.

Did OSI hire some CPD dicks??

It is now overdue that the feds eliminate the Office of Special Prosecutions (persecutions?). Not one single Stalinist has been brought to trial. Only 90 year olds that were 18 at the time of the alleged crimes. By the way this man was not charged with any crime of violence. He was only charged with working there. The Jewish revenge meisters were wrong once before about this guy.

No arrests of Soviet Jewish communists who slaughtered millions of christians. Joseph is still a common name.