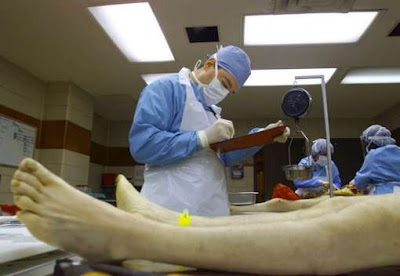 Los Angeles--The United States Supreme Court has spoken and now 46,000 bogymen must be released from California prisons. With no jobs available as it is, the prospects for honest work for these proven thugs is simply non-existent. The majority of these criminals are drug addicted and will do anything to pay the cost of feeding their habits. California is about to see a firestorm of crime like never before.

A more logical way to deal with this is through ending the drug prohibition and letting out only drug offenders. Burglars, robbers, rapists and such need to stay put. With legalized drugs, their cost will fall to that of sugar or tea. These addicted convicts, won’t need to rob and murder to sustain their chosen condition.

Those in prison for possession, manufacture, sale or trafficking in drugs can be released. The Drug Lords, Drug Czars and such will be forced out of business in a single day. Selling drugs will have no better profits than selling tacos.

We can still maintain laws against driving under the influence and discriminate against the drug dependent for employment.

The death toll from the failed Drug War far exceeds that of the drugs themselves. Thousands of innocent people have died directly because of bungled crimes and drug enforcement efforts and that too will end.

It’s illogical to assume that legalization will cause us all to start sticking needles into our arms. Thankfully most of us will continue to have no interest in this very dark side of life.
Ending the Drug War will produce an amazing quiet in America like the years between the Alcohol Prohibition and the Drug Prohibition. Government can’t afford to continue as a nanny controlling vice.

With the tax dollar savings of ending the $100 Billion a year on the Drug War dangerous people can continue to be safely segregated from society in prisons where they belong.

The drug related business can be zoned far enough away from residential neighborhoods and local parks as to prevent additional blight.

I suspect that our politicians won’t see the error of their ways and we will see criminal anarchy on our streets like never before. Police will never be able to deal with the new carnage we will be forced to experience. The law-abiding better rethink their personal security and take whatever steps are necessary to avoid a trip to the Medical Examiner’s Office on gurneys.
Posted by Paul Huebl Crimefile News at 5/24/2011 09:08:00 AM

"I suspect that our politicians won’t see the error of their ways...."

to them, there are no errors.

after all, promoting the criminalization of vices gets them everything they are addicted to:

3. the feeling of certainty that they are superior.

4. the leverage to indulge in their every whim.

5. the ability to maintain their delusion that they will live forever, unimpeded by that pesty thing some call 'a quirk of fate'.


the rest of us are merely objects for their use.

or so they believe.

I agree with everything in this post. It's nice to know that I'm not the only one who thinks this way. Well said Paul.

Three of our current and recent PRESIDENTS have said they used illegal drugs. Time to stop the madness.