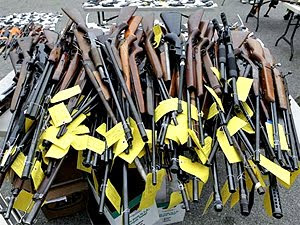 The program was recycled Saturday here at six locations by city officials. They offered gift cards from Ralph's Supermarkets or Visa. A mere handgun would fetch $100.00 while a so-called assault rifle would garner $200.00. As always, there were no questions asked as they handed over the plastic currency to the anonymous participants.

As always, most of the guns collected are worth far less than what officials paid for them. These buy backs attract gun dealers from everywhere who see the opportunity to make a small profit unloading what they can’t otherwise sell.

In some cases burglars were paid for the proceeds of their crimes turning the LAPD into an illicit fencing operation.

Close examination of the junk collected always shows rusted, broken and totally unserviceable firearms. Toys always somehow turn up in the collections. There are only a few exceptions where decent and even collectible firearms are turned in for the bounty.

Yes, there were cases of departed grandfather’s old guns being sold off. You could make a very weak argument that fewer guns are in closets that could be later stolen and misused.

The big question I always have that the media refuses to ask is, who pays for this expensive feel-good scam? The taxpayers nearly always eat this cost in most jurisdictions where these things are done. Of course this only happens in parts of the country where governments are run into bankruptcy by Liberal politicians. Any claim of corporate sponsorship rings hollow when you take into account their “charitable” tax breaks for their less than generous participation.

Do taxpayers still have the money for such meaningless and extravagant programs in this tough economy?
Posted by Paul Huebl Crimefile News at 5/08/2011 09:18:00 AM

10-20 years ago they had such a buyback here in Tucson. All the gunnies, and some dealers, traded in all their junker guns for tidy profits. Some enterprising collectors stood outside the turn-in locations, and if anyone walked past with a worthwhile gun, offered more than the turn-in price and got a heck of a bargain.

I got the list of guns turned in, and it was full of BB guns, parts of guns, etc.. Even a few "suicide specials," cheapie guns made in the 1890s.