Let me take you on a tour of an historic courtroom at 2600 S. California Avenue, Chicago, IL 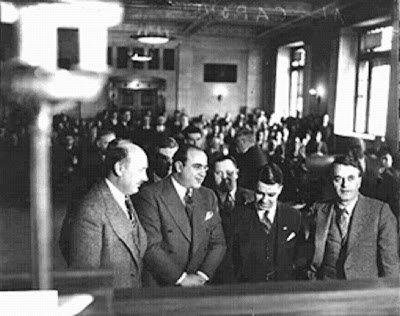 Chicago, IL—During a recent trip to Chicago involving a criminal trial I wanted to take my blog visitors inside the historic criminal courthouse. This is where the infamous mobster, Al Capone was tried and convicted for Income Tax Evasion. Long ago the Federal Judiciary used some of these facilities for their business too.

The movie, The Fugitive starring Harrison Ford was filmed is a courtroom here too. It’s a rare day when cameras are allowed in and never during court proceedings. 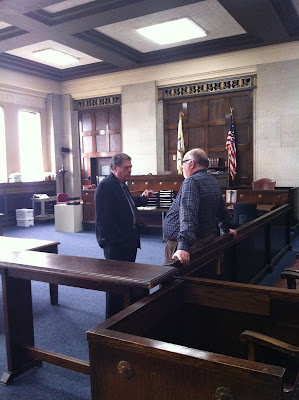 Lewis, a well know militant Black thug was already under one well-deserved death sentence and was about to receive another for the cold-blooded killing of a Thillen’s Security guard servicing the Sebring Jukebox Company’s payroll more than a year earlier.

Lewis took a bailiff and assistant state’s attorney hostage with a gun provided by a court clerk who was enamored with the killer. She placed the gun in a hollowed out book for Lewis. Lewis was kept in the chambers handcuffed under guard by an armed bailiff. Concealed inside Lewis’ mouth was a homemade handcuff key from a ball point pen refill. He used the key to slip one wrist from the cuffs and dashed for the gun inside the book.

Lewis then disarmed the bailiff and with a revolver in each hand grabbed the hapless prosecutor and bailiff and began his walk to freedom.

An Area Four detective, Crosette "Lee" Hamilton heard the commotion and concealed himself behind the gray steel freight elevator outside door. In the years since this even that large steel door was removed and no longer exists. Hamilton waited for the trio to pass and fired the first shot. Two uniformed officers assigned to the court from the Marquette District (010) opened fire on Lewis as he fell to the ground.

Lewis managed to wound the state’s attorney in the hand and another shot struck local lawyer, Leonard Karlin in the butt.

When we lifted Lewis’ body from the floor there was a flattened .38 standard 158 grain lead bullet on the floor, under his head. that bullet never even penetrated the killer’s head!

Within a few minutes of the shooting I personally saw, Black Panther Party, founder and now Congressman Bobby Rush was on the scene visibly angry and shaken up. To this day I believe that Rush was involved in the escape plot and was perhaps waiting in a car outside on California Ave. If Rush was an accomplice he still could be charged with felony murder of Lewis since there is no statute of limitations on that crime.

I attended the post mortem examination of Lewis and counted 22 holes from as many 18 gunshots. The Iceman would never hurt anyone again.

Within a day the presiding criminal judge, Joe power told me he was ordering big changes. Power had ordered the Cook County Sheriff, Joseph I Woods to provide his police to search everyone entering the building. Power concluded that people entering the building, are doing it as a matter choice and that the search was then consensual. For the next month 35 guns per average day were taken from court visitors surprised by the search. Thousands of knives and an astronomical amount of narcotics were recovered. There were no prosecutions of these people most of which were already convicted felons. Instead we confiscated the contraband during a three-month grace period. After that, arrests were finally being made.

This is when and where courthouses all over America suspended the Fourth Amendment and 40 years later that suspension has become a defacto revocation. The searching of courthouse visitors has spread to nearly every court in America.

I eMailed a copy of your blog to Lee.

Wow, thanks for the history lesson. I'm always amazed by the events that happen that are lost in time, yet influence current day issues.

I'd never heard of that thug, or his attempted escape, but I certainly now know the underlying event for searches at courthouses (and everywhere else it seems).

Was there any brain damage to the lawyer shot in the ass?

What a story, Paul. I never heard of this. It's amazing how Rush and other racist thugs like him continue to have a voice in politics.

Was there any brain damage to the lawyer shot in the ass?

another fine example of a rhetorical question.

Crazy story. I gave some of the pictures from the incident

Sorry for the loss of life Gene took..I looked up to him because he was nice to me and flashed that gorgeous smile..R.O.H