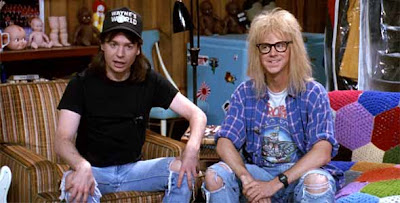 Sherman Oaks, CA—Charlie Sheen is embroiled in a media war unpatrolled anywhere in history. I’m not sure what’s really going on in Sheen’s world. For all I know this whole apocalypse could be nothing more than a giant publicity stunt.

By all appearances this multi-millionaire is going through a meltdown fueled by alcohol, drugs and the largest ingredient, massive ego. Is this all just an act? There is no shortage of comedy, heartbreak and drama in this media Armageddon.

“Sheen’s Korner” broadcasts are done with a simple computer with broadband, a cheap camera and ordinary household lighting. Anyone, almost anywhere could do better quality broadcasts than Sheen has produced so far. The public lure of Sheen’s broadcasts seems to be sheer morbid voyeurism.

Sheen’s normally clean-cut TV appearance is embellished by the best TV make-up people who are noticeably and sorely needed for, Sheen’s Korner. He certainly looks like he’s on an extended bender on his show.

Should Sheen, CBS, Warner Brothers and the show’s creator resumed, Two and a Half Men right now it would break every ratings record ever established.

Sheen is a devilishly clever lad and born showman. Is there perhaps more to, Charlie Sheen’s Winning than meets the eye?

I personally want Sheen to succeed. Sheen’s many talents have enabled so many people to realize the American dream with lucrative employment connected to Sheens projects.

If as most people suspect, Sheen is going through a dark period of illness, addiction and the road to suicide, this is beyond tragic.

Sheen above all has to be a father to his young children. Yes, he can support them incredibly well but he has a more important duty and that’s to be their role model.

If Charlie is suffering from illness he needs treatment and those bridges that were burned must all be rebuilt by all involved. Those people who have been hurt need to do the right thing and that’s to help this fellow in spite of himself.

I want this war over, the show to continue and everyone involved to profit like they never have before. That can happen. Sheen’s young life hangs in the balance. Sheen and his family deserve a better entertainment effort than, Charlie sheen’s Winning. Sheen could easily retire in a grand lifestyle, but I insist that he also has an obligation to share his talent with the world. Let’s hope this was all just a grand publicity stunt.

Charlie Sheen was fired Monday from “Two and a Half Men” by Warner Bros. following the actor’s bouts of wild partying, repeated hospitalizations and a bitter media campaign against his studio bosses.

The action was taken after “careful consideration” (Heard that one before in L.A.!!!). No decision has been made on the show’s future without its star, Warner spokesman Paul McGuire said.

Sheen, 45, who has used TV, radio and social media to create a big megaphone for himself, was not silent for long.

In a text to The Associated Press, he responded with the F-word and, “They lose,” followed by the word “Trolls.” Asked if he planned to sue, Sheen texted back, “Big.” As for his next move, Sheen texted, “A big one.”

The firing capped a rare, raging public battle between a Hollywood star and those who employ him, with Sheen claiming the right to live as he pleased — including the acknowledged use of illegal drugs, although he’s said he is currently clean — as long as he showed up sober and ready to work.

Success and winning is not the problem, but hubris is. Charlie and his drug rampage and ranting against his bosses, & his wish to carry on with drugs, turned the situation into a power struggle and Charlie Sheen is losing.

Note: In its modern usage, hubris denotes overconfident pride and arrogance; it is often associated with a lack of humility. The proverb "pride goes before a fall" is thought to sum up the modern definition of hubris. It is also referred to as "pride that blinds", as it often causes someone accused of hubris to act in foolish ways that belie common sense.

The definition of hubris seems to fit this situation.

No longer sex drugs and rock and roll, but in Charlie's case sex, drugs and hubris.

The only people 'WINNING' are his attorney's and enablers. If I were his Mother, I would be at his home with a straight jacket and court order to have him committed. If this man doesn't get the help he needs, sooner rather than later, he will be dead by end of June. He is crying out for help and no one is listening

Charlie Sheen does not need a straight jacket, he needs to find peace.

Charlie's crime was that he was ill and he got found out because he was ill, and it leaked into the media.

Nobody cared a hoot at the Studios what Charlie was taking as far as drugs or who he was sleeping with, before Charlie got ill and news of this leaked into the media.

Of course Charlie needs a straight jacket or at least someone who loves him unconditionally to take control. The poor man is sick and needs help to find that peace and tranquility or else he will DIE!! It's sad to watch him self destruct!

Charlie would not want to be Rosemarie's son if she wants to TREAT him WITH A STRAIGHTJACKET.

How about strength coming from withiin, the ability of the individual to heal himself. Or is that not part of Rosemarie's experience. Not everyone falls down the slippery slope that Michael Jackson has.

For example the Rolling Stone, jack Nicholson and Hugh Hefner are still alive and kicking.

Also Charlie has some excellent help from his lawyers who do not love him unconditionally but who INSTEAD LOVE TO BE PAID. THEY ARE CONTROLLING HIS AFFAIRS.

If Rosemarie wants to help someone some day she is proposing to go about it in the wrong way, and may greatly harm and alienate the person she is claiming that she wants to "help"

Of course Charlie needs a straight jacket or at least someone who loves him unconditionally to take control.

Obviously you don't understand what I'm trying to relate. The straight jacket is representing a need to take control of someone who is clearly out of control.

Nobody cared about Sheen's habit until he was ill and the FACT that it leaked into the media was Charlie Sheen's real crime, since those around him had tolerated what was happening with Sheen for some time.

Being ill for a few days and calling the doctor is not under the category of being clearly out of control!

What else is there to discuss?

Being ill for a few days and calling the doctor is not under the category of being clearly out of control!

So who is winning now?