Two Hours and a Lunch in Wannsee 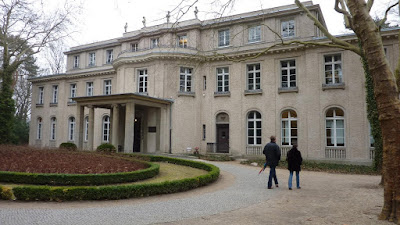 Berlin, Germany—On the outskirts of this great city is a resort community known as Wannsee. This place has a large beautiful lake and serves as a summer playground for those who can afford it.

When the Allies invaded Germany a curious transcript was found in the personal effects of a man named Martin Luther. Luther had been imprisoned in a concentration camp but he had been the Under Secretary of the Reich Foreign Ministry.

This transcript was a Nazi secret document that was supposed to have been read and immediately destroyed. Luther violated the order and preserved it instead. That document shed a spotlight on a two-hour, January 20, 1942 meeting where 15 assembled high-ranking Nazis settled the Jewish Question. The question was answered with a plan to exterminate every Jew within their reach.

The meeting was held in a sumptuous and grand Wannsee villa that exists today as a War Crimes Museum. Visitors can stand and walk on the same floors as the panelists did where the Holocaust was planned.

In addition to the transcript there is the supporting testimony of Adolph Eichmann who was instrumental in setting the meeting up. That testimony came in Israel after Eichmann was kidnapped in Argentina and brought before a court to answer for Crimes against Humanity. We know for sure exactly what took place at Wannsee.

The panel of 15 included seven trained lawyers. Presumably that was to make sure that Reich Law and the Nuremberg Laws making Jews, persona non grata were followed.

The Chairman of the Panel was the notorious SS-Obergruppenführer Reinhard Heydrich. Heydrich was Hitler’s number one Hatchet Man. He had special powers of persuasion backed by his ability to exercise deadly discipline on anyone attending. Crossing Heydrich was a really bad idea.

Yet two of the panel members, Wilhelm Stutkart and Martin Luthur balked at the outrageous plan exercising nearly tombstone courage. Others suggested the less horrifying solution such as mass sterilization of Jews. Other panelists were simply intimidated into cooperating with the murders of millions of men women and children.

Some panelists complained that the German war effort was dependent upon the Jews they already conscripted for labor. Killing their workers would certainly have an adverse impact on armament production. That compelling argument fell on deaf ears.

By the time lunch was over these Nazis had their Top Secret marching orders.

Jews and Gypsies were efficiently transported far from Germany on rail lines to special state of the art death camps for mass extermination and cremation. Words like resettled and evacuated replaced kidnapped and murdered in the new Nazi lexicon.

HBO re-created the Wannsee Conference in a accurate dramatic film shot at the actual villa with actors Kenneth Branagh and Stanley Tucci. The film is excellent.

After my visit to the Wannsee Museum I had a wonderful lunch nearby but our conversation was much lighter than that dark one in 1942. Here is some video from my visit there last week. Following further below is the trailer for the movie Conspiracy filmed on location at the Wannsee villa.

More photos can be seen here:

This shows that what is legal is not always right, and the danger of "adjusting" the law to accomplish a goal. Laws exist to restrain government from taking the rights of people, not to make it easier for them.

Take everything with a grain of salt. According to Jewish sources, there were 150,000 Jews in the German military during WW2, 7 Jewish Generals and 1 Jewish Field Marshall. Most of the people that died in the camps died of disease (no anti-biotics back then). Towards the end of the war more prisoners died of malnutrition and related deseases because the allies destroyed the transport system and warehouses. In such situations, your troops eat first, your people second and finally, if anything is left, the prisoners eat.

Paul, I interviewed people who were investigating the camps for the allies at the end of the war. They determined that 1 1/2 million died in the camps. Even the Holocaust memorial in Israel has lowered the number from 6 million. Here's a question for you, how many million German men, women and children where murdered after the war? Some estimates are as high as 15 million. Where is our museum?

The meticulous transport and liquidation records of the Nazis, is what the six million figure was based upon.

You are quite correct about the disease, starvation and other causes of death under those extreme conditions.

The Nazi’s expelled the Jews from Germany and the land they occupied. They stole the homes, businesses and furnishings of the Jews. The Nazis also kidnapped and enslaved the Jews that were not smart enough or able to flee.

The record of the Wannsee conspiracy is substantial and undisputable proof of the architecture of the Holocaust.

The National Socialists or Nazis were the most despicable form of criminal. They acted under the color of law. Their monstrous crimes caused the needless suffering and deaths of a great nation. Nine million Germans perished along with six million Jews and Gypsies.

The German people were duped by Socialism and a government they mistakenly trusted with too much power and the ability to make public policy in secret.

Many Jews will rot in Hell for their treacherous collaboration with the Nazi bastards. The Jewish councils were the ones that selected who should live or who should die even before the Nazis.

I fault all the able-bodied Nazi victims for something every race on earth exhibits, cowardice. We as human being have a duty to use any and all necessary force to protect and preserve the lives of our selves, families, and friends.

Had the Jews all exercised the courage of a few in the Warsaw Ghetto the Wannsee Nazi plans could never have been accomplished.

Never give any politician, government or anyone your right to keep and carry state of the art weapons, for self-defense.

Never surrender. I knew a Christian guy who was grabbed off the streets of Holland during WW2 by the Nazis, when he was only 12 years old. They put him in one of the labor camps. He said it was about 4 months before he was allowed to notify his parents. 85% of the people deported from France east to the camps where non-Jews. Mostly commies, leftists, gypsies, homosexuals and the unlucky.

Paul, without a doubt the Stalinists were the worst. Maybe tied with Maoists. The nazis were probably in third place in a very bad catagory. That's if you go by the number of victims. The outrage today is this, if you discuss or question the number of Jews that died in Europe during the war, and you're standing somewhere in Europe, you will be sentenced to 5 years in prison. Why?