Executed For Speech and Thought 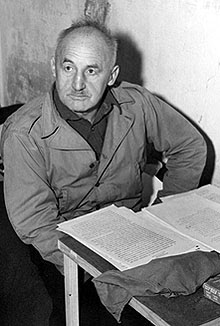 Nuremberg, Germany—Of all the Nazi’s tried and condemned to death at the main War Crimes Trial here, one stands out as a travesty of Justice.

Julius Streicher was the founder and publisher of Der Stürmer newspaper, which became a central element of the Nazi propaganda machine. Streicher also published three vile, anti-Semitic books for children.

Striecher was the Nazi poster boy for pure hate. He had no special government power nor did he control any aspect of the genocide. He was nothing more than a zealous Nazi cheerleader.

Streicher was simply a world class Jew baiter who published hateful material. Streicher was no more than a Nazi propagandist and a hatemonger. He’s not someone that I’d ever want to have lunch or socialize with.

Stricher was tried and convicted as a war criminal simply for his thoughts and published words. That was a total Orwellian travesty of justice.

The subsequent hanging of Stricher was an apparently just another act judicial tyranny and murder under color of law. I guess hate and hate speech is only permissible when the targets are politically correct.
Posted by Paul Huebl Crimefile News at 3/29/2011 01:32:00 PM