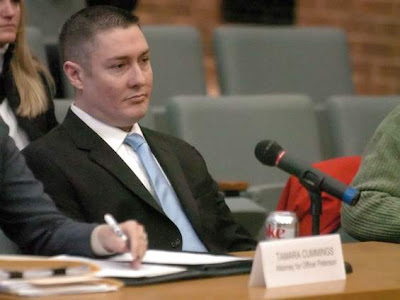 Oak Brook, IL—The son of retired Bolingbrook police sergeant Drew Peterson refused to tell investigators what they wanted to hear about his father. The penalty was that he be discharged in a two-fold effort. Part one was simply to pressure and punish Drew Peterson and part two was to turn the younger Peterson into a snitch.

Oak Brook Police Chief Thomas Sheahan danced vigorously to the music of Will County State’s Attorney James Glasgow. Glasgow simply brought a case against the elder Peterson despite a lack of admissible evidence and is suffering embarrassment accordingly as a result.

The good news here is they will be in a different court where Glasgow has no jurisdiction. I don’t think this action by the Oak Brook Police and Fire commissioners will pass Constitutional muster.

The younger Peterson’s FOP lawyer, Tamera Cummings fired the first shot with her petition filed below:

The chancery court is as corrupt as they come.The machine still controls them.If they want you out,you are out.

They fuck with the son in order to get the father.