The Nazi Defense, I was Only Following Orders 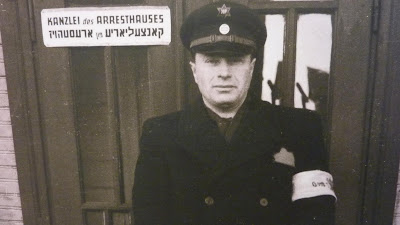 Nuremberg, Germany—At the end of World War Two, many high ranking German military and civilians were tried and hanged for Crimes Against Humanity.

In the tribunals many of these defendants raised the defense that they were only following orders. That defense was scoffed at and ridiculed since these men and women (yes, we hanged German women too) were involved in one of the greatest mass murders in history.

What most casual observers did not really know, was that every member of the military had to swear a personal oath of allegiance to Adolph Hitler rather than the German people or a Constitution. The penalty for speaking out, resisting or obstructing Hitler was death.

The mass gassing of Jews, Gypsies, homosexuals and mental patients was a closely guarded state secret. What few knew was that the members of the military and government that had no idea what some Nazis were doing far away in Eastern Poland. That is, beyond relocating and resettling people on account of their race or religion.

Even Anti-Semitic Germans were horrified to learn of the murders of men women and children. The Jews that were shipped off to the death camps were more knowledgeable of their fate than the average German citizen. The lack of resistance seems to indicate that the secrecy of the genocide program worked very well.

Thankfully most bigots are not murderers or the human race would have perished long ago. Nearly everyone finds some culture or behavior of other races less than desirable. Of course there will always be those few who believe in genocide.

In the mix of German society there were Jews that were actually in the ranks of the military and SS including some 150,000 soldiers, seven Generals and at least one Field Marshall. Some of these men were hiding among the troops and many others were simply in the military before the Nazis gained power. Nobody can imagine Jews taking an oath to Adolph Hitler but it happened.

That oath and the penalties for violating it coerced many to do things they’d ordinarily refuse.

What everyone seems to ignore was the Jewish Councils established to assist the Nazi’s in their genocide. It was these councils rather than the Nazi’s that selected who would face evacuation to the death camps first.

The other’s that too often escaped punishment for collaboration with the Nazis were the Kappos, (A Jewish Kappo is pictured above) who marshaled fellow Jews around with clubs. These unfortunate souls saw perhaps an extended life and better conditions trough facilitation of the monstrous crimes of the Nazis.

What the War Crimes Trials established was a duty to always resist tyranny no matter the risk or cost to one’s self. It is an interesting concept that we have overlooked. Of course it is only the winners of wars that label and hang war criminals. It is only the losers of the wars that are led to the gallows.
Posted by Paul Huebl Crimefile News at 3/28/2011 07:31:00 AM

The enemy unfortunately is within. Germans are NOT the only culprits. Humanity is.

Even in the 9th Circuit Court of Appeals in USA torture is a state secret just as you have pointed out that torture and genocide was in Germany of course on a much larger scale.

A good 9th Circuit judge wrote a bad decision regarding States Secrets in this case. Other judges of course agreed with him to make the majority decision.

This torture/State Secret case is being appealed to US Supreme Court but the odds of the case even being heard in that court is just as rare as winning the lottery. For the petition to the US Supreme Court see below.

As far as this article's mention of the Jewish Councils established to assist the Nazi’s in their genocide, this is not surprising as some people of any religious group or any other kind of group, will be happy to betray you by chosing you to be shipped off to be killed even if you bear the same stigma- so as to make money for themselves, for promotion, or to save their own lives.

Being fully aware of this sad state of affairs - the potential betrayal that can rear its ugly head in any human system, given the right circumstances - separates someone who has experienced this horror first hand - as opposed to someone else who has not, since that person will not be able to warn or depict the truth.

It was a Jewish Judge Laurence J. Rittenband who betrayed Roman Polanski in the Santa Monica Courthouse in California, America, by double crossing him and breaking the plea bargain agreement when Roman Polanski had already served his time.

Betrayal is not uniquely Jewish or Polish but it can happen in any faith and anywhere, in any group depending on the circumstances and the people involved.

Derek Myers at RBKC should hang for his crimes against children and innocent people, they are infested with corruption there, evil