The Death Penalty and American Justice 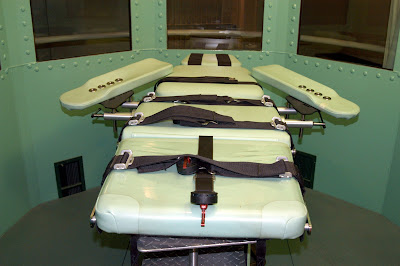 Berlin, Germany—I must admit that I’ve long ago parted company with the vast majority of cops on the death penalty. It’s not that those savage, sadistic and cruel thugs who murder innocent people deserve any mercy at all, because they don’t.

I will never waiver in my absolute belief in the use of immediate deadly force by any citizen to stop a violent felony crime in progress. Self-defense and the protection of our families is a right given to us by our creator and must never be inhibited by our politicians and bureaucrats.

For me the problem is government. Governments including ours are run by politicians and their appointed political hacks that nearly all enrich themselves and blunder through their turn at “public service”. Unfortunately as we know only too well these people can’t seem to have the simple skills to even count small change.

Even if our government officials are not being malicious or grossly incompetent they constantly make lots of mistakes. Those mistakes happen incredibly too often when it comes to the death penalty. I have favored a higher standard of proof at the minimum rather than that nearly impossible to define term, Reasonable Doubt. Right now murder convictions are based on the guess of some jury.

Governments can and do change in a heartbeat. Other factors such as the steady effort by the nation's prosecutors to allow courts to weigh evidence precluded by our Bill of Rights. Once unconstitutional laws are passed, it can take decades before the courts get around to striking them down.

You may like the political make up of your government today but bad health, elections and political violence can bring you a leader that you will loathe. It is unwise to give more than minimal power to any politicians that affect your life, liberty and pursuit of happiness.

The power over our very own lives is what many people are willing to entrust politicians to defend and protect. I’m unwilling to do that ever.

Plötzensee Prison was a long-time, Prussian correctional facility for criminals. They supported the idea of the death penalty in Germany. The criminals convicted of despicable, cruel or infamous murder were placed under the executioner’s axe at a rate of less than ten per year.

Plötzensee changed when law enforcement duties were handed to thugs and political hacks loyal to Adolph Hitler. The standard of proof was changed and the kinds of allowable evidence in the courts of the Third Reich.

Nazi courtrooms and justice was only allowable for those people not outlawed by mere genetics. Jews and Gypsies had no rights and were deported to resettlement locations where they were simply liquidated in secret.

No less than five thousand Germans were tried and executed for treason for any resistance or disrespect to the Hitler Administration. Thousands of others were sent to work concentration camps inside Germany for very long terms.

Unfortunately the Third Reich is always singled out as an anomaly or very unusual criminal regime. These governments are everywhere in the world today but lack the kind of meticulous record keeping, photographic and film proof created by the Nazis themselves.

The winners of wars never face was crimes trials. Josef Stalin’s government murdered tens of millions and their soldiers and bureaucrats raped the women and children of Berlin for years after they controlled this area. They all escaped any civil or military punishment.

The evil of the Third Reich is not some genetic defect that only affects Germans. That evil is in every government on earth waiting for power that citizens will willingly give them.

Americans have the duty to keep a sharp watch over our freedom. We somehow failed as we have passed loads of laws restricting freedom. Hate speech and thought is under attack every day. Imagine if in America you could not openly express hate for someone as evil as Adolph Hitler? That was a capital crime under Nazi law.

Don’t trust your government not to abuse the power to kill their own citizens.

Learn more about the Death Penalty in this video:

I too started off with the kill them all mentallity.Then I became a cop and saw the numerous problems with our judicial system.Too many retards and fuckups on the job.

People forget that the way the Nazi's worked was through a legal framework. They didn't eliminate courts (at least not until well after the war started), but instead changed the law, lowered the burden of proof and allowed hearsay evidence to be presented. All in the name of "law and order". Sound familiar to what is happening in the USA? As a very wise man once said "the price of liberty is contant vigelance".

And if the lie is big enough they will believe it.

For instance John F Kennedy was assassinated by one.

Is it true the Germans are the only people who are lied to by their government, and if the lie is big enough they will believe it?

The Big Lie (German: Große Lüge), a propaganda technique. was coined by Adolf Hitler, when he dictated his 1925 book Mein Kampf, for a lie so "colossal" that no one would believe that someone "could have the impudence to distort the truth so infamously."