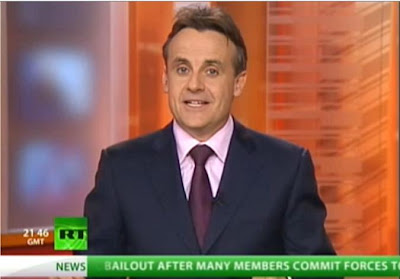 They broadcast both on airwaves and the internet and quickly respond to disturbances, disasters, and battlefields of the world. They have a seemingly credible operation that broadcasts in English.

I recently began watching this six year-old media source and find that it refreshingly lacks being a Leftist apologist propaganda machine like nearly every American broadcast and cable network.

RT has an uncanny ability to be the first with video from any major story such as the Japan earthquake. They have news bureaus in many of the world’s capitols. I can’t imagine that I ever envisioned a foreign news operation would have more objectivity and credibility than something home grown. They can be found right here.
Posted by Paul Huebl Crimefile News at 3/27/2011 02:04:00 PM

Yeah. These RT guys are straight-up heinous. I've written some posts on the matter, and it's beginning to trouble me: http://paulmbrown.blogspot.com/2011/05/communist-russian-propaganda.html