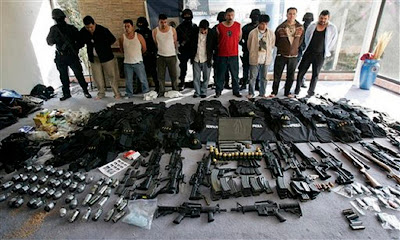 Washington, DC—U.S. Attorney General Eric Holder and Hillary Clinton were both involved the culpability chain of the Waco, TX massacre of men, women and children. They have a long-standing and proven track record for violating American’s Constitutional rights to keep and bear arms. This pair is at it again.

They have created their own gun crisis to use in a propaganda war against gun rights. They knowingly have instigated, allowed or facilitated the export of firearms from American sources to flow into the hands of Mexican drug cartel criminals.

The purpose has become obvious as they have manufactured their own statistics to convince the media and Americans that our gun rights are the cause of Mexican drug violence.

What is missing is reality here. The guns are ours and we are not awash with the violence. Is there something in the Mexican DNA like a drug-murder gene? I guess the Obama Administration Gunrunning Operation lacks common sense. But let’s not let that get in the way of their propaganda engine that thrives by spreading disinformation.

Many Federal agents have now come forward to expose this criminal enterprise operated by our own government. They’ve risked their careers and personal safety to send out the warnings. The major media has done all they could to avoid reporting this story that’s right out of an Orwellian nightmare.

Obama wants to respond to this phony emergency with a fix just like the Nazi’s had after they torched the Reichtag in Germany. That ended freedom and gave the government huge new powers. Every criminal regime in history has followed this crisis manufacturing concept to increase their powers as they steal liberty.

Are we supposed to now trust these exposed liars with the keys to our hard won Constitutional freedoms?

The good news here is that this conspiracy is being exposed because the Obama Administration has blundered their way through this expensive publicity stunt.

There is a crisis both in Mexico and the United States for sure. That crisis is the Drug War itself. It’s the prohibition that has provided massive profits, carnage as it filled our prisons to the bursting point. The Drug War has killed many more people than the drugs themselves. Addicts are compelled to commit a massive amount of crime to fund their drug cravings. That alone put us all at risk.

Any violence crisis in Mexico can end in a day through calling off the failed Drug War. No more profits, no more killing and no more government excuses to, invade privacy and steal our freedom. Of course lots of government bureaucrats would be looking for work without their precious Drug War.

Ask yourself this question, if drugs were legal would you risk your own life and health to abuse them? Unless you’re already an addict, that’s highly doubtful. How many people experimented with drugs simply because it was the fruit from the forbidden tree?

Is the 100 Billion per year we spend on the Drug War better spent on treatment and research to combat the social blight of our drug addicts?

A side note: Most all of the guns in the picture came from American direct to the Mexican government. The guns then fell into the hands of the criminals. Most of these guns can only be sold to government agencies.
Posted by Paul Huebl Crimefile News at 3/27/2011 02:38:00 AM

You cant walk into your local FFL and buy 40mm M433/M406 rounds.The new manufacture of machine guns to US citizens was suspended on May 19th 1986.Those nice full auto M16s were sold to Mexican police and military units with US State Dept permission,who in turn sold them to narco trafficantes.

You cant buy M67a1 fragmentation grenades at Dicks sporting goods.This is the old Clintonistas up to there old smoke and mirror show.