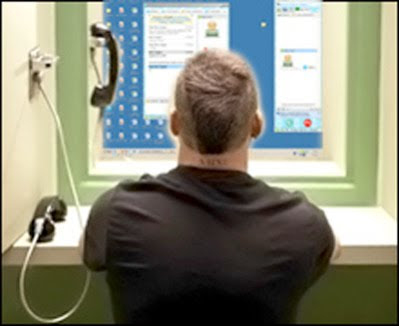 Let me say that my blog visitors don’t consider me a bleeding heart or a Liberal by a long-shot. I believe that those who prey upon and victimize their fellow man deserves swift and severe punishment.

There was a recent story of a prison inmate that created a Facebook page with a contraband Blackberry cell-phone. Cell-phones are considered a big no-no by the wardens of our jails and prisons. They are so wrong about this.

These can become privileges that foster good behavior. Inmates can be induced to perform well in educational or job training programs with a small perk like that.

Prison visitation can be accomplished through the use of Skype.com’s free video teleconferencing service. There would be no risk of contraband being brought into our correctional facilities.

Let’s face it inmates will be released someday and it’s better if they have the support of friends and loved ones. Prisons are nearly always difficult for visitors to travel because of distances. Those important bonds can be fostered through simple communications.

Imagine inmates able to communicate well enough to find honest ways to re-integrate with society? We want these people off of welfare and functioning rather than remaining anti-social misfits going off like landmines after their release.

This entire idea of our modern communications must be re-thought. The Russian government has seen the light and they’re doing this right now.

The real punishment of prison is the absence of liberty and being bossed around by prison guards. The food generally is pretty disagreeable and having to live with a bunch of despicable felons has got to be horrible. The absence of any physical contact with the opposite sex must be devastating. Of course the Gay prisoners are never deprived.

I can’t help but think about an, actually innocent women, who’s been in prison for just over 20 years. Her mother lives in Germany and is suffering from cancer. There is no way she can travel and visit her daughter. Aside from the cost are the medical issues that are preventing any visits. Skype.com has a humane answer to this problem. Would a one hour video call every week or two somehow damage society?
Posted by Paul Huebl Crimefile News at 12/02/2010 05:10:00 PM

Your idea makes too much sense, so it probably won't happen.

The prisons are not going to give up those pay phones that rake in a ton of cash. It is not uncommon for each pay phone to bring in $10-$20,000 each year. It's probably much higher in the bigger prisons.

On some occasions, special accounting practices can make that money disappear but it usually ends up in the right pockets.