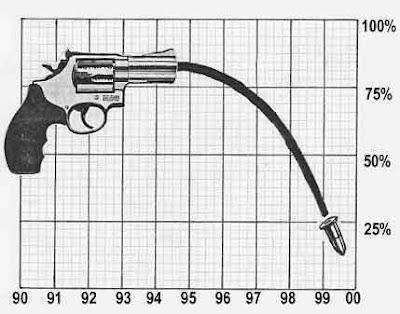 Phoenix, AZ—Arizona this past summer lifted virtually all restrictions on the possession and carrying of firearms by all but convicted felons, wife beaters and mental defectives.

Today, Arizonans can pack as many loaded weapons on their persons or in their vehicles as they can carry. There is no registration of either the guns or the owners. There are no waiting periods or other obstructions to buying firearms. There remains the federal instant background check and other requirements involving transfers and sales of firearms.

The state’s largest newspaper, The Arizona Republic has announced a substantial reduction in homicides for Phoenix and it surrounding communities. That’s despite a large increase in illegal alien drug violence and human trafficking related behavior.

Somewhere since statehood (1910) Arizona’s gun hating politicians outlawed concealed weapons for all but active peace officers. Citizens could make an end run around the ban simply by joining their local Sheriff’s Posse. That practice ended when peace officer standards and training certification requirements became law. The posse members lost their right to conceal a firearm.

I remember having a conversation with my late, Republican Arizona State Senator, Jackie Steiner in the early 1980s about lifting the ban on concealed weapons through a somewhat restrictive permit system. Steiner was horrified! She said to me, “Don’t you know what would happen if we did that?” She than told me, “Why’d there be shootouts at every traffic accident!” Steiner was also obviously ignorant in that existing law allowed for loaded guns to be kept in unlocked automobile glove compartments.

Steiner was a well-meaning lady but she did not have a clue. She like the majority in the Arizona Legislature came from the larger metropolitan Eastern cities where draconian gun regulation and bans were in vogue. Steiner had hopelessly bought into the big lie.

I spent the next 14 years along with another Arizona gun rights lobbyist, Landis Aden pushing various bill at the State Capital to legalize or at least create a shall issue permit system. It was a difficult and protracted fight that finally ended in a victory. A true hero of this fight was the late Prescott Republican Representative, Dave Carson. Carson took an incredible amount of abuse even from his own party over the continued support of gun rights during his legislative career.

Is the drop in murders related to the abolishment of restrictive gun laws? Have Arizona’s cowardly criminals reacted to the real risk that their potential victims can and do carry weapons for self-defense?

The nation’s gun control advocates have lost all of their credibility after all but a few states have clung to their failed crime-enabling policies to keep victims unarmed.

Now it’s the politicians, police, prosecutors and the courts of Illinois, California, New York and New Jersey have to deal with the Supreme Court’s decisions in Heller and McDonald. For it is now the officials in these jurisdictions that are breaking the law of the land, not their citizen’s who dare carry weapons for self-defense.
Posted by Paul Huebl Crimefile News at 12/11/2010 12:38:00 PM

No doubt,and im sure that AZs enforcement action with illegals has contributed to a reduction in violent crime,plus less drain on government services.

I know where im moving too when I retire.