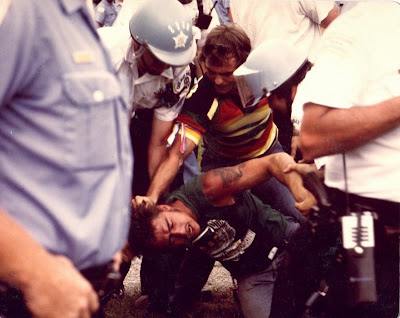 If I owned or controlled a TV station in let’s say Chicago I’d being doing TV news just a little differently.

I have a gritty crime reporting unit that is separated from general assignment reporting. As always the news casts leads off with whatever segment has the most importance of that day. Weather always leads when it’s severe or the broadcast could be hinged on a major sports story. However when it bleeds, it leads.

The crime, courts and corruption segment would have its own name like Crimebeat, special graphics and faces. Reporters in this group need an attitude and style set apart from general assignment correspondents. They’d be using certain cop slang terms such as perp-walk, pinched, collared, and mug-shot. These reporters would be recruited from the ranks of cops, prosecutors and defense lawyers.

TV news viewers need to believe the crimebeat reporter understands his or her business. In the end it’s all about credibility and trust. No news department can function without the trust of those people inside the criminal justice system. Fluff reporters and crime news just don’t mix except in rare stories.

Crimes are by nature sensational and dramatic. The viewers want to know about the newsmaker’s actual prior criminal record rather than what some attention-whore, busybody neighbor has to say about him. Viewers want cold hard facts over gossip any day.

Crime reporters must learn how to use and abuse the court's and other public records to tell these stories.

If they’re leading with an important crime story, than they should put the necessary resources and work into it. Today’s TV new organization all have websites and the anchors and reporters should be promoting it. The viewers can be directed to view the actual court documents and see full length interviews rather than the 15 second sound-bites of the news makers. The website is the place for all those things that can’t possibly get stuffed into a TV newscast.

The Internet is here to stay and the news department’s website must attract both viewers and advertisers.

TV news has seen little change since the days or Edward R. Murrow. TV news is and should be exciting, accurate and interesting. The delivery of this product has instead become lethargic and lame.

Crime news affects everyone. I’m not suggesting we create a product that mimics Orson Wells’, War of The World broadcast. People don’t need panic-peddling broadcasters but they need to know the dangers they face with reduced law-enforcement resources and budgetary induced prisoner releases.

The public should also get the truth about their needs and rights to cope with the reality of violent crime. Providing tips on safety, locks, alarms, firearms training and self-defense is a duty of broadcasters.
Posted by Paul Huebl Crimefile News at 12/04/2010 09:22:00 AM

In the upcoming Chicago election.
I hope everyone has a look at these candidates. Most are Police, Military etc...
Conservatives,Independents and Republicans

if you never considered making a political donation before. now would be the best time to get involved. even a small amount could help.

we need people in office that will look out for us.

the Chicago machine is on it's heels and trying to fight back and get back the power they fear they are losing, but we can fight back as well

the republican party knows that this is a once in a lifetime opportunity to restore the checks and balances that Chicago severely needs.

That picture reminds me of the good old days when assholes would get a well deserved tune up by the cops. They would think twice about giving the cops a hard time during their next encounter.

The wood shampoo solve all.

I really liked my kel-lite.