Mexico’s Gun Violence Is Not Our Problem 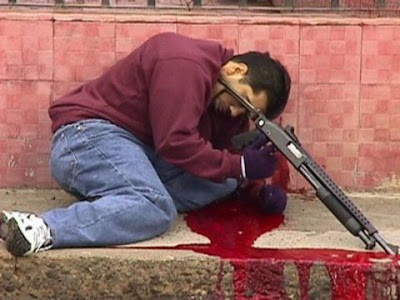 Mexico, City, Mexico—Mexico is run by a corrupt and pathetic group of criminals. Government whores thrive financially with the drug trade and the obscene profits as they conspire with the criminals.

Caught up are some police and drug rivals into a violent world of mass murder. The guns involved are often of German and American manufacture. They are supplied to the gangsters, not by American gun dealers but Mexican government officials. The guns are either sold or stolen in raids on government installations. Most of the weapons are fully automatic rather than the semi-automatic variety available at American gun dealers.

The Mexican government is whining about the guns that fall in the hand of “unapproved” drug cartels. They claim that is the result of American gun freedom.

If Mexico does not like American freedom they are free to erect along their border. Of course the gun rights haters living in the United States want to use Mexico’s mess as a reason to take freedom from Americans.

I love how the BATFE is looking at 8700 FFLs along the border.

Last time I checked you cant buy full auto M4s from Colt unless you are the Military or a Police Dept.M203s are not at your local sporting goods dealer,neither are the rounds.

Who makes the full auto AK47/AKM type weapons in the USA??Did Norinco or Izhmash open a factory?

All the weapons I have seen in various news reports are not available in the USA.except to military police customers.
Does your PD have have a purchase order with the Russain governement?


The Full auto M16s from Colt were sold,with State Dept approval,to Mexican military and police units,who then in turn sell them to drug cartels/narco trafficantes.

they're too busy building tunnels.

The picture with the article is of one of the cartel bosses who was accidentally shot by one of his own guys, during a gun battle with the police! Sweet justice.

Interesting choice of a Mossberg 500,Butler creek folding stock,is that some type of red dot/collimator sight on the receiver?