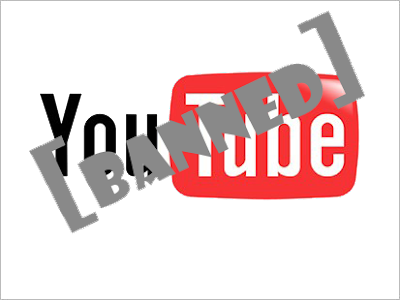 I guess it was going to happen since Internet free speech is just too free. People are using YouTube to suggest violence as a way to deal with government tyranny. YouTube will resolve complaints by viewers of political content that suggest those routine and historical ways to preserve freedom. YouTube has said they will begin disabling accounts. This is a simple and pure effort to tightly control Americans, and YouTube and its Google parent are taking sides against thought and speech.

Free speech is considered by too many in this world as too powerful a tool for Americans to possess. Every criminal political regime in history has found it necessary to control thought and speech. YouTube should butt out and simply let the law and our courts decide what’s over the top rather than become a part of a repressive political force. Perhaps this is a move by Google to gain favor with impending regulation via the so-called and misnamed, Net Neutrality Internet control effort by the Socialists in our government.

Tyranny by government is always an honorable reason and catalyst for revolution. Governments have proven themselves to be prolific mass murderers redundantly throughout history. Any government that restricts freedom, including our own should be stopped in its tracks by whatever means is necessary including deadly violence. Failure to take action only invites more repression.

What’s past is prologue and history books are filled with horror stories like The Third Reich. Adolph Hitler started out with a role model benevolent political image, but things quickly changed when they gave him absolute power. Hitler did his nastiest deeds in secret and quickly executed anyone trying to expose them. Any government on earth is a heartbeat away from becoming a danger to their own population.

When government becomes more powerful than the citizens is when things become dangerous. Speech, movement, arms possession and other controls slowly ratchet up under every rogue government. Anyone suggesting freedom restriction must be viewed as nothing less than an enemy of America and its founding principles. Violence is a just and reasonable alternative when the politicians turn a deaf ear to the demands for freedom by their subjects.

Over the last two years we saw a rogue administration defy the wishes of the majority of the population. Despite major demonstration and nationwide polling results the Obama Administration turned a deaf ear to America. Americans strongly objected to Socialist style bailouts, nationalization of businesses and the takeover of the health care and insurance industries. The Socialists and Communists in our government turned against the people.

Thankfully we had an election that jettisoned many enemies of the American form of government and way of life from our Capital building. There are still too many Communists and Socialists in our government and of course the Whitehouse.

Free speech is a way for all Americans to have a say in just government impacts them and their families. Long live FREE SPEECH and those with the courage to exercise it.
Posted by Paul Huebl Crimefile News at 12/13/2010 09:58:00 AM

The purported reason for this move on the part of YT/GOOG is because of those Islamist videos and terrorist acts in the UK. That's giving GOOG cover to delete conservative videos and the accounts that post them, to scratch Larry and Sergey's political itch (leftists) and to keep CAIR from whining when they delete Mohammed El-Mohammed videos about murdering infidels.

Sorry, no, this isn't a freedom of speech issue.
If I take a soap box into a shopping mall, they have the right to throw me out. It's a privately owned facility just like YouTube.
But I *can* go to a public (as in "owned by") with that same soap box and preach to my heart's content. And by the same token, I can put up a web server on the Internet and say anything I want.
YouTube *does* go a step further and allow people to say *almost* anything they want. But if someone points out to YouTube that something is inflammatory or downright dangerous, then YouTube becomes party to the posting. If they permit it to stay, they are liable.
So, once YouTube is notified that something is "bad", it is in their interest (because of liability) to decide if it should stay or not. It's their website so they get to choose.
Having said all that, it's arguably true that, should YouTube remove something this *isn't* inflammatory or incendiary or illegal BUT claim that it is (and remove it), then they are in a different territory, that of libel. The defamed party *could*, I think, take them to civil court.
But, then again, I'm not an attorney so what the hell do I know?

"But, then again, I'm not an attorney so what the hell do I know?

yes, edward, what the hell do you know?

Many people believe the internet is a portal to unlimited information. Nothing could be further from the truth. The internet makes it easier to filter, delete, or ban information and ideas.

I keep reading about this ominous "net neutrality" subject that the socialists are supposedly trying to pass. What I don't understand is why many folks are against this. The internet has operated under net neutrality since it's inception. The net neutrality proponents are simply trying to keep things the way they have been. The big telecommunications people are trying to change the way they are allowed to operate by being able to charge more based on usage, plus have the ability to control more of the content. It seems to me that if you enjoy the internet as it now is, then you should be in favor of the net neutrality legislation.

"Network neutrality (also net neutrality, Internet neutrality) is a principle proposed for user access networks participating in the Internet that advocates no restrictions by Internet service providers and governments on content, sites, platforms, the kinds of equipment that may be attached, and the modes of communication."

There will be nothing neutral about government regulation over the Internet and its content. Net Neutrality, should mean things are fine they way they are.