Obama’s Popularity has Tanked Within the Democratic Party 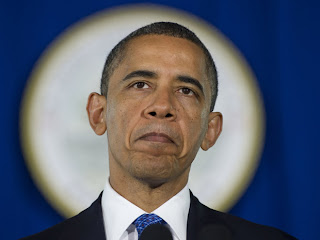 Los Angeles, CA—The latest poll in this land of, Liberal giants has Barack Obama’s approval rate below 50%. That’s quite shocking when you consider the incredible strong showing he made here just three years ago. Of course Obama’s nationwide approval ratings are much worse and reveal doom for his rapidly falling star.

Yesterday’s two special elections to fill House seats were especially humiliating for the Obama Camp considering that NY spot has not fallen to a Republican since 1923!

The facts are not good. Obama led the charge, plunging the nation into a terminal fiscal quagmire of inescapable debt. He bailed out every crooked banker, Wall Street money- changer, and failed carmaker. The hemorrhage of jobs, productivity and hope has continued unabated.

We certainly got the Change Obama promised but that Hope thing went straight to Hell. The change was anything but positive.

Obama promised transparency, withdrawal from our mid-eastern war adventures and the most ethical Whitehouse ever. What he delivered was government by a secret and un-vetted Czar Cabinet along with some outrageous scandals. Under Obama yet a third war theater was added to the mix.

Federal agents were murdered with guns purchased with stimulus tax money by criminals working with the Obama Justice Department. These government-sanctioned gunrunners supplied thousands of guns to drug gangs in Mexico and Central America. The motive was simply to fuel Obama’s anti-gun rights demonization propaganda machine. Obama wanted to justify suspending our Second Amendment through signing a United Nations civilian gun ban treaty. Obama wanted to show that it was American guns responsible for all of this third world carnage. Outraged BATFE whistle blowers exposed these secret shenanigans unexpectedly.

Then there was that little$528 million loan to Obama’s political contributors over at Solyndra's solar energy project. Obama personally put the pressure on to make that loan despite massive red flags over solvency concerns months before the loan was approved, Solyndra's bankruptcy filing along with probable cause of criminal activity brought on an FBI raid just last week.

We cannot ignore the millions of African-Americans that were promised what Obama could not deliver. Whether their expatiations were unrealistic will be the subject of debate but one thing for sure all that cash was handed out to anyone and everyone except the middle-class and the poor.

Under Obama the poor got poorer and the nation is falling into an economic abyss. That kind of liability would be fatal to the Democratic Party.

The Democratic Party now knows it must excise the Obama cancer or face serious consequences. I’d look for expanded investigations supported by Democrats and the likelihood of impeachment in order to cull Obama out of the 2012 elections.

Democrats are rolling their eyes as they shake their heads when asked about Obama. They are beginning to slowly circle the wagons around Hilary Clinton as a replacement for Obama on the Democratic Presidential ticket.
Posted by Paul Huebl Crimefile News at 9/14/2011 10:56:00 AM

The DNC will green light a prosecution in Gunwalker/Fast and Furious, and put an end to Obama.

Obama: the PROBLEM, not the solution.

Obama, the Midas Touch in Reverse. Never send a Boy to do a Man's Job.