An Airliner Hijacking With a Different Ending. 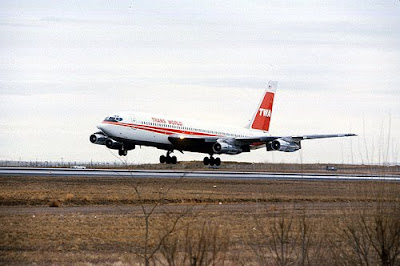 Los Angeles, CA--As we relive the horror of 9/11 and deal with the tenth anniversary of the murder of some 3,000 Americans we have to think about handing these threats in the future. I will tell you a long forgotten story that had a much different ending.

The only hijacker ever shot on an U.S. airliner, was on September 15, 1970 on board a TWA, Boeing 707 jet. The flight left Chicago for San Francisco, but gunman Don Irwin, 27, seized the plane just after an L.A. stopover. Irwin threatened flight attendants in the aft galley with his gun demanding the plane head to North Korea.

This particular plane was in no way equipped or even able to make such a journey. This hijacker was not quite as clever as he thought.

The pilot J.K. Gilman was informed of the hijacking and was aware that Robert Denisco, a Brinks guard was sitting in First Class wearing plain clothes. Capt. Gilman quickly used the telephone to ask a First Class fight attendant to tell Denisco what was going on and to, “tell him I said to go back and shoot that Bastard!”


I tracked down and interviewed Denisco, a Viet Nam combat veteran who was now living in Chicago just after the 9/11 attacks for ABC World News Tonight. Denisco’s saga was absolutely amazing to hear.

Denisco like everyone was horrified by the events and had a lot to say about the inability they had to deal with the attack. My interview with Denisco lasted well over an hour.

Denisco took the captain’s request seriously springing into action. He kept changing his seat slowly moving in the direction of the aft Galley. Stopping whenever he found an empty seat he look back and move a few more rows until he was right at the Galley. The gunman never noticed the Brink’s guard.

Denisco was thinking quickly and felt that he needed maximum cooperation from the passengers and flight attendants. So rather than to just jump up with his service revolver he did so yelling at the gunman, “Police Officer, drop your weapon!” Of course he was not a cop but under the dire circumstances who’d care.

The gunman suddenly spun pointing his gun in the direction of Denisco and the guard fired a single shot striking Irwin in the abdomen. Denisco quickly seized Irwin’s gun and the plane was able to make a safe landing. Through modern emergency medicine the hijacker survived the shooting despite being critically wounded..

The follow up to this story should have inspired a motion picture but that never happened.

The FAA immediately began construction of the first Air Marshall program. When they sought a person to lead this new agency they offered the job to the shy Brinks guard. Things were suddenly really going well for Denisco and Brinks did not want to lose their hero. Day’s earlier they brought him to O’Hare airport to a meeting or perhaps more of a gathering of various officials.

They brought Denisco to the podium where they had a speakerphone and took a call for him. It was President Richard Nixon calling and he wanted to talk to the hero!

Brinks loaned Denisco to the FAA for several years where he related his experience to trainee air marshals.

Things took a curious turn at the FAA. They decided that people like Denisco could no longer be trusted with firearms on airliners! They promulgated regulations that disarmed even sworn and trained cops! Pilots were disarmed and as expected only the hijackers and federal officers would carry firearms in the future.

Later the anti-gun zealots during the Clinton Administration were looking for any new ways possible to take American’s gun rights away. They started with anyone ever convicted of misdemeanor domestic violence. Then they extended the lifetime gun ban for anyone convicted of childhood delinquent acts that constituted a felony.

This time they seized the gun possession rights of none other than the retired heroic Brinks guard because of a joyriding episode he was involved with a lifetime earlier. That deed put him in front of a strict Juvenile Court Judge.

Today our government has not made us even a littler safer. They have only had great success in waging a war of degradation, humiliation and tyranny on American travelers.

The TSA has not stopped a single terrorist event despite spending hundreds of billions. There were some attempts made by a shoe bomber and more recently the panty bomber. Those terrorist efforts were halted by ordinary citizens, not TSA or law enforcement officials.

Paul,
Thank you for making sure we never forget.

Government is only concerned about how to justify its existence. You can't have people being able to defend themselves on planes because that means you wouldn't need the government to do it for you. No need, no taxation. No taxation, no job. Where else can you go to screw up so badly that your subordinates actually get killed but you get promoted? Every f@#k-up in the world wants a government job!

America has turned into a nation of C*&%s

Paul, just goes to show you and all of us that this country has gone to hell in a hand basket, thanks to all the do-gooder liberal bastards!!!!

Great post, and an excellent point... I can remember ferrying mil acft and checking our 'bags' with the pilots as we boarded, since we had .38s in the bag along with flare pistols and various other safety items. Hell, today you can't even check those bags as luggage without totally securing the 'weapons'...

I self-id as a liberal, but think thatgun laws are stupidly restrictive. I also wonder what kind of worldview SOME have, when 'do-gooder' is an insult.

As I recall there have been two cases of hijackers shot by pilots who were armed because they carried US Mail. This one was in1954:

"July 6, 1954,a ...teen-ager armed with a pistol commandeered an American Airlines DC-6 at the Cleveland Airport, only to be shot and fatally wounded by the captain."