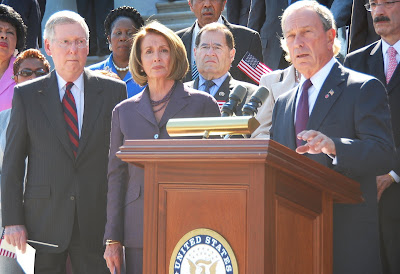 New York, NY—Every politician that can, does. They’re all mugging for the cameras and offering self-serving sound-bites to enhance their images. The ceremonies have little to do with the 3000 victims and their families. They have been lost in the sea of shameless politicians and their media flacks elbowing them aside for valuable TV face time and maximum political exposure.

I suspect that there maybe some ragtag Muslims around that want to throw a bomb or two. On the other hand legions of our creepy politicians love spreading the hype and reassuring us they’re doing all they can to keep us safe. Anyone who believes the politician driven terror related media hype is beyond help or hope.

This has been a week of pure political pandering on the grief along with real or imagined fears of Americans. This is all part of a larger propaganda effort to convince frighten Americans to forgo their liberty and freedom for the illusion of security.
Posted by Paul Huebl Crimefile News at 9/10/2011 04:31:00 PM

I agree with you Paul. These elected officials are slime balls.

Once again Paul you hit the nail on the head. The public officals crawl all over each other to get their face time on camera. Although we will never know but if there had been armed law-abiding citizens and flight crews aboard those planes the out come would have been different. Makes me think the do-gooder liberals are to blame as much as the ragheads are!!!

No fear citizens the NEW YORK army will keep you safe! Politicians will be the end of America! Ron Paul could possibly save us,but will never get the chance.

Any time Nancy Pelosi rears her ugly mug at some event you know it's all a sham. The 9/11 memorial services held in New York should have featured members of the NYPD, FDNY, and Port Authority cops, not a bunch of sleazy political hacks.

You notice how the politicians show up and tell us how great they were on that horrible day? The day the pols let us all down? The day the feds failed us. If ever anyone should want to nuke us, I'm sure the pols fail to protect us then also. No one got fired. No one got demoted. We are lost.